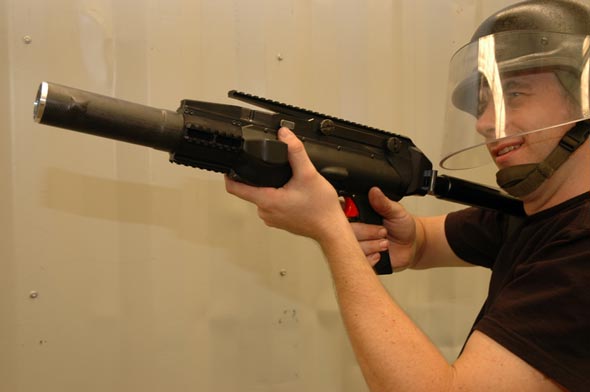 The recent endurance test followed successful firing tests of the 3GL earlier in 2009. According to Metal Storm Chief Engineer David Pashen, a single weapon was used continuously throughout the test, firing Metal-Storm patented three-stacked ammunitions, demonstrating good results for the weapon and ammunition. “We used a single 3GL that was not cleaned throughout the test” he said. “The ammunition and weapon … maintained a constant velocity for 200 firings without any adverse effects.” Said Pashen. “Metal Storm could now build on the results and complete the full qualification of the ammunition.” said Pashen. “Firing 200 rounds in stacks of three demonstrates that this system has reached levels of maturity and reliability that had not been previously demonstrated by the company” he said.

Loaded with the three-stack ammunition, 3GL offers a unique advantage of being the only 40mm launcher which is light and compact enough to attach as an accessory to an assault rifle, while also providing a three-shot, semi-automatic firing capability. According to Dr Lee Finniear, CEO of Metal Storm Ltd., this feature provides users a critical advantage in an opening of an engagement; “in the first few seconds a squad equipped with 3GLs can unleash three times the number of 40mm grenades on the enemy. Whether in a planned attack, or in response to an ambush by the enemy, this firepower can be the decisive element in winning the firefight and saving our soldiers lives.” Finniear said.

The MAUL is an ultra-light shotgun attachment that fits under the barrel of an individual combat weapon including the M-4 and M-16 rifles (as an accessory it is designated GLH1851). Traditionally soldiers have carried separate weapons to perform door-breaching and less lethal force missions. The MAUL allows both missions to be performed by a single weapon system with minimal weight overhead. This battery powered weapon was originally developed to provide door-breaching capability with standard assault weapons. However, the 12 gauge MAUL is capable of firing a range of both lethal and less-lethal munitions. Constructed from carbon fibre with a steel barrel, MAUL weighs only 1.8 pounds. Because there is no conventional mechanical action, the weapon exhibits superior performance over other 12 gauge guns and operates over a wider range of climatic conditions. The MAUL attaches to the weapon’s Picatinny rail and is bore sight aligned to the host gun sighting system.

“The MAUL was conceived with a great deal of influence from the US operational community” said MSI General Manager Peter D. Faulkner, “We were consistently told that weight should be at the top of our design priorities. At 1.8 pounds, we think we have set the bar for a five shot semi-automatic shotgun.” Although the MAUL is capable of firing a range of lethal and less lethal munitions, Mr Faulkner said Metal Storm is seeing a particularly strong interest in less lethal applications from military, security and law enforcement communities. “The MAUL readily adapts to the unique aspects of urban operations with a range of traditional and specialty capabilities to include standoff door breaching and neuro-muscular incapacitation,” he said. “With the MAUL’s quick-load munition tubes an operator can instantly reconfigure his weapon to suit the mission.” The company displayed the MAUL at the Joint Services Small Arms System Symposium in Las Vegas, Nevada (May 20, 2009) as an accessory to the M4 as well as a stand-alone version with a folding shoulder stock.

The MAUL testing culminated in a series of shoulder firings at Metal Storm’s test facilities in Chantilly, Virginia USA on Friday, 24 April 2009. For the MAUL testing, the weapon was integrated onto an M4 rifle and shoulder fired using 12 gauge Blunt Impact rounds. These munitions are one of several rounds to be offered by Metal Storm for the MAUL. The weapon weighs 1.8 lbs, below the original design goal. “The MAUL is capable of firing munitions across the lethality spectrum and is attracting considerable interest within the international military and law enforcement communities.” mr. Finniear said.