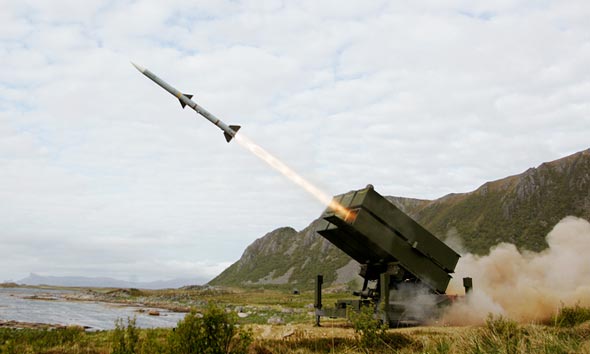 The jointly-developed NASAMS II system won proposed by the Norwegian-U.S. team won over a competing proposal offering a longer range Aster 30 missile (also known as SAMP/T), submitted by the French-Italian Eurosam group. The range of the surface-launched missiles used by NASAMS is ‘over 15 km’. The Aster-30 could kill targets at twice that range. Since the two systems are not comparable in performance, it could be assumed that the selection NASAMS was selected as it enabled Helsinki to acquire more systems for their budget, compensating the limited range with better networking allowing more efficient area coverage. To achieve effective medium range capabilities, Raytheon considered developing an extended range version capable of intercepting targets at a distance of 40 km.

The new system is intended to replace SA-11 (BUK) systems purchased from Russia over a decade ago. Like Aster-30, the SA-11can also intercept targets at ranges twice as far as the new NASAMS. Finland argues the relatively early withdrawal of the Russian made system is necessary due to the lack of compatibility with NATO systems. Although Finland is maintaining its neutrality, the country has steadily drifted toward the west, establishing closer ties with Europe and NATO. Selected for operation by Norway, Netherlands and Spain, NASAMS has been fully integrated with NATO air defenses since 2006, through the implementation of Link-16s with each of the system’s command posts.

The Finnish system will be based on the NASAMS system, developed for the Royal Norwegian Air Force during the 1990s and fielded in 2007. The system has since been contracted by the Netherlands and Spain. The NASAMS is also deployed for homeland defense by the U.S. Air National Guard. Developed by the Norwegian company Kongsberg Defense and U.S. based Raytheon, NASAMS comprises the Raytheon MPQ-64F2 multifunctional radar, command, control and communication systems designed and built by Kongsberg and the Surface-Launched AMRAAM (AIM-120). The program will also fund €176 for the modernization of Finnish long range radars to be provided by the Thales-Raytheon Systems Company.

“In a Nordic context, this choice of system opens up exciting opportunities for cooperation, operation, maintenance and even further joint Finish-Norwegian evolution of the system”, comments Kongsberg’s Harald Ånnestad. The contractors of NASAMS II program are obligated to 100% offset procurement in Finland. As part of this obligation, 82 lorries produced by the Finnish vehicle manufacturer Sisu Defense are to be procured for €25 million. Sales Director Joonas Uotila of Sisu Defence trusts the co-operation with Kongsberg enhances possibilities to offer also further SISU military truck products for broader international market.Patria will also be provided an undefined work share.

As part of its share of the program Sisu Defence Oy, will provide the Armed Forces of Finland with 82 heavy-duty SISU 8×8, SISU 6×6 and SISU 4×4 off-road military trucks as part of the Defence Forces’ Air Defence System and Air Surveillance System renewal project. Deliveries are scheduled for 2010-2014. The trucks will be manufactured at Sisu Auto’s Raasepori Plant in Finland. 30 of the vehicles to be supplied are of 3-axle SISU E13TP 6×6 model series. These trucks built for transporting the NASAMS Air Defence launchers will be equipped with hooklift systems by Multilift, and with flat beds for the cargo. For the Air Surveillance System project Sisu Defence supplies 12 heavy-duty 4-axle trucks of SISU E13TP 8×8 model series. These trucks will serve as platforms for the mid-range Air Surveillance Radars. Further 40 vehicles are of SISU A2045 4×4 model series introduced in autumn 2008, and meant for serving as support vehicles for the Air Defence and Air Surveillance systems. The current order adds to an earlier order for 234 SISU 4×4 military trucks, awarded by the Defence Forces.