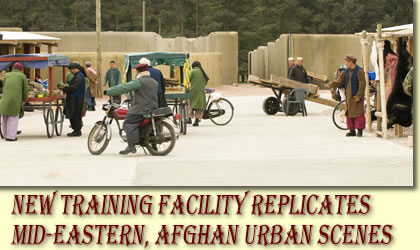 A new training facility opened this week at Norfolk, UK will provide realistic, comprehensive and relevant training to British troops deploying on operations to Afghanistan and the Middle East. The improvements and construction at the STANTA training area lasted eight months and cost £14 million. The new facility officially opened April 30, 2009 and preparations for the first units to be trained there, the 11 Brigade are underway. The brigade’s unit will start final training next month prior to deployment to Afghanistan in the autumn.

The location is designed as a typical, rural Middle Eastern village and an urban complex, designed by the Operational Training Advisory Group (OPTAG) to replicate as closely as possible the situations which troops could face on operations in the Middle East.

With the help of Afghan nationals and others who take on the role of non combatant (civilians) and insurgents in these training areas OPTAG will be able to replicate the sights, sounds and smells of the Middle East. From the call to prayer heard across a busy market place, a bustling family home, to a network of claustrophobic alleyways with high walls the areas provide for a complex and realistic way to train troops and test their skills under demanding conditions. The training area is used for both live firing and non firing training for 350 days each year. On average 80,000 troops use the area annually.