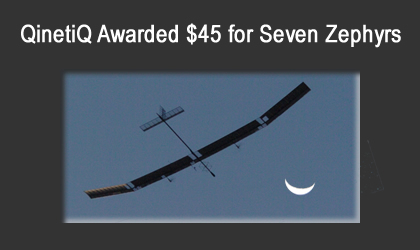 QinetiQ, Inc has been awarded a $45 million by the US Naval Air Systems Command (NAVAIR) for the development and manufacturing of seven Zephyr High Altitude Long Endurance (HALE) unmanned aerial systems and one ground station. The ultra-light HALE aerial vehicle will provide persistent coverage capability over a remote theater, with mission durations of up to 3 months of continuous operation, propelled by two solar-powered electrical motors.

The unmanned aircraft has a wing span of 18 meters but weighs only 30 kg, utilizing a structure constructed of carbon fibers and powered by solar energy generated by amorphous silicon arrays covering the aircraft’s wings. These cells, no thicker than sheets of paper also form the wing’s airfoil. The hand-launched drone uses different energy resources during the different flight phases. By day it flies on solar power generated by part of the solar arrays. By night it is powered by rechargeable lithium-sulphur batteries that are recharged during the day using solar power.

Zephyr co-funded by the UK Ministry of Defence funding and US Department of Defense (DoD), under a joint under their Joint Capability Technology Demonstration (JCTD) Program. Zephyr capability to fly missions lasting several days was first demonstrated in July 2007, setting a world record for the world’s longest continuous flight, flying for 54 hours. More recently, the solar-powered aircraft broke its own record again. Tested in August 2008 at the US Marine Corps Yuma Proving Ground, flying continuously 82 hour and 37 minutes carrying a communications relay set weighing two kilograms. QinetiQ will produce the Zephyrs at Farnborough, in the United Kingdom. The seven aircraft are expected to be delivered within five years (May 2014).

The JCTD is sponsored by the US Central and European commands (CENTCOM and USEUCOM). Under this program the Zephyr concept is being matured, through development and operational evaluation. While ISR mission is stated as one of the requirements, It is doubtful if the small payload will provide adequate resolution from such high altitude orbits. However the system will provide an excellent asset for persistent communications relay and communications intelligence.

The solar-powered system will be succeeding another long-endurance HALE system; the hydrogen powered Global Observer, being built by AeroVironment. The more versatile Global Observer unmanned HALE cruiser is significantly larger than Zephyr, weighing about four tons and carrying 450kg of payload and fuel. Speed and internal capacity are positioning it as more rapid responsive asset, capable of carrying a larger payload of multiple sensors, better performing ISR missions from high altitude.

While Zephyr offers extremely long endurance (typically employed on continuous three months missions) and operating at altitudes of 50,000 – 65,000ft, Zephyr will fly high above the weather and above all military or commercial air traffic, thus have no impact on integration or coordination with air-traffic. Overall, each platform will cost about $1.7 million to produce but require no consumable (fuel, electricity etc.) for operation.

Another solar-powered persistent UAV is under the US Defense Advanced Research Projects Agency’s (DARPA) Vulture air vehicle program. Boeing and QinetiQ have teamed to offer a solar-electric Unmanned Air Vehicles (UAVs) concept for the program, with the objective to create an aerial platform that can deliver and maintain an airborne payload on station for an uninterrupted period of more than five years using heavier than air vehicles. The Boeing-QinetiQ team is employing many of the technologies developed for the Zephyr for the DARPA Vulture program. The objective of the Vulture program is to develop an aircraft capable of remaining on-station uninterrupted for over five years to perform intelligence, surveillance, reconnaissance (ISR), and communication missions over an area of interest.  The technology challenges include development of energy management and reliability technologies capable of allowing the aircraft to operate continuously for five years.  Vulture, in effect, will be a retaskable, persistent pseudo-satellite capability, in an aircraft package. The Vulture program will conclude with a year-long flight demonstration with a fully functional payload.

The goal of the Vulture program is to carry and operate a mission payload weighing 1,000-pound, powered by electrical generation and storage system providing 5kilowatt of power and having the ability to maintain on-station position for 99 per cent of its flight. Currently the only systems capable of providing multiple years of coverage over a fixed area are geosynchronous satellites orbiting 22,233 miles above Earth. Pat O’Neil, program manager, Boeing High Altitude Long Endurance Systems said: “Such a ‘pseudo-satellite’ system, like Vulture, could provide compelling operational advantages in terms of persistent intelligence, surveillance, reconnaissance and communications.”

“our Vulture program will develop an aircraft capable of remaining on-station for over five years, pushing technology and design so that the system will not require refueling or maintenance.” Said Dr. Tony Tether, Director Defense Advanced Research Projects Agency. A single Vulture aircraft could support traditional intelligence, surveillance, and reconnaissance functions over country-sized areas – while at the same time providing an unblinking eye over a critical target, monitoring that target night and day, providing unprecedented high-value intelligence. “Vulture aircraft will also be able to provide communications capabilities available today only from geostationary satellites – offering opportunities for new, more flexible, expandable and relocatable communication architectures at a fraction of the cost of dedicated satellite capabilities” Said Dr. Tether. The challenges here include developing solar cell, energy storage, and reliability technologies that will allow the aircraft to operate continuously, unrefueled for over 44,000 hours.

In July 2010 the QinetiQ team embarked on a two-week long flight over Yuma, Arizona, aiming to break several world record for UAV endurance missions. Around 50% larger than the previous Zephyr, technical changes now mean it has a 22.5m wingspan to accommodate more batteries that are combined with a totally new integrated power management system. The entirely new aerodynamic shape and high “T” tail also contribute to reduce drag and improve performance. The payload capacity will meet a number of key surveillance and communication requirements already demonstrated by Zephyr over the past three years. Zephyr’s ultra-lightweight carbon-fibre design also means it weighs in at just over 50Kg.