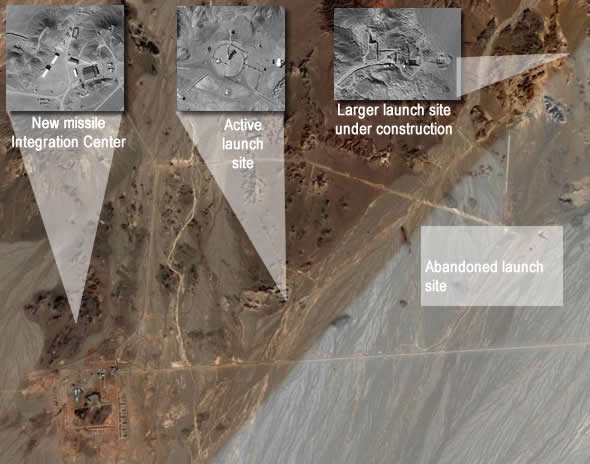 Another new facility at Semnan is the missile integration center, where payloads are fitted to the missile. (such as the Omid satellite launched earlier this year). Photo: Imagesat

East of the active site, the Iranians are constructing a new facility that could be supporting the Iranian solid rocket propulsion development, associated with the Sejjil and Ashura missiles or even larger missiles – according to Jane’s Intelligence analysts, the site could be associated with the next-generation Simorgh rocket. Another site, prepared few kilometers south of the new construction area seems to be abandoned. Photo: Imagesat.

Below: Another image, taken 27 November, 2009 showing the construction progress at the site, with a sizeable gantry tower constructed at the launch site, with an associated launch pad, and fully constructed flame bucket diverting the missile’s exhaust gases from the hillside. The launch site is linked through separate tubing, to a nearby, sheltered underground facility located at the upper left hillside. A new construction located close to the launcher, shown at the lower right side of the picture, could be a protected observation site to be provided with video and recording systems. (Photo: Imagesat)

Jane’s IHT analysis, based on the use of commercial satellite imagery from DigitalGlobe and GeoEye, has confirmed Defense-Update’s findings about this Iranian site. Jane’s analysts suggest the new launch pad is being constructed at Iran’s Semnan space centre to support Iran’s space program, and it is the site from where Tehran will launch its next-generation Simorgh rocket and future satellites.

The images were taken by the new WorldView-2 satellite image on 6 February 2010. Jane’s has reported spotting the site about four kilometres northeast of Iran’s existing launch facility at Semnan. Jane’s analysts also identified the tower object as a gantry tower, and the oblique view provided by the World-View 2 satellite positively confirms this assessment. Jane’s estimated its dimmensions to measure 13 metres wide, approximately 18 – 20 metres tall, with the cliff-side flame bucket nearly as high as the tower itself. Jane’s analysts assume the construction appears midway towards completion. Although the tower is not yet tall enough to facilitate vertical assembly of the 27-metre Simorgh, but analysts expect the launch pad could easily accommodate Iran’s new rocket if the gantry were to be extended by an additional 10 metres.

In addition to this site, IHS Jane’s has observed another facility two and a half kilometers to the southwest; between the new site and the existing one. Although this facility is in early stages of construction, its heavily secured nature and restricted access indicate it is a primary element of the newly constructed complex.

The development of the Semnan facility and the Simorgh SLV both demonstrate the likelihood of collaboration with North Korea in Iran ’s missile programme. The platforms seen on the new gantry tower resemble those seen on the gantry tower at North Korea ’s new launch pad at Tongchang. A drainage pit 170 metres directly in front of the pad also mirrors one at Pyongyang ’s new west-coast launch site. Similarly, the first stage of the Simorgh strongly resembles the North Korean Unha-2, with four clustered engines and nearly the same dimensions.