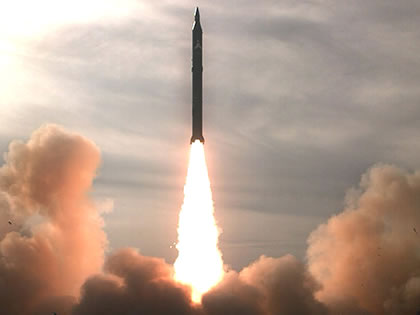 December 16, 2009: Iran has successfully tested today an ‘optimized’ version of the solid-fuel Sejjil-2 ballistic missile. The recent test builds on the first successful launch conducted in May 2009 (below). Iran has tested several combinations of propellant compounds to achieve reliable operation. Iranian sources indicate that the current missile has been configured to carry different warheads and uses stealth attributes (‘anti-radar material coating’). The use of solid propellant dramatically reduces pre-launch preparations, enabling the missile to be fired immediately after being erected by the mobile launcher. The Iranians claim the solid-powered Sejill-2 is faster during the powered ascent as well as on reentry, and, therefore, more difficult to intercept. It is also more accurate than the former Shehab.

May 20, 2009: Iran has successfully test-fired a Sejjil-2 medium-range surface-to-surface missile, a solid-fuelled missile developed in Iran (with North Korean assistance). This missile is also known by the names Ghadr-110 and Samen. The missile is capable of striking targets at ranges beyond 2,000 km (1242 miles) carrying a 1.2 ton warhead. Iran’s President Mahmoud Ahmadinejad confirmed the news on a visit to Iran’s space and missile center at Semnan, from where the missile was launched. US pentagon sources confirmed the launch was successful indicating that according to initial data, the missile profile correlates with the larger Ashura (Ghadr-110) missile, with a range of 2,000 to 3,000 km (1,200-1,900 miles).

Iran began testing large solid-fuelled missiles in 2008. Such missiles are considered more versatile and survivable since they are stored with fuel, ready-to-launch on a moment’s notice offering quick response capability as soon as the Transporter Erector Launchers (TEL) reaches the designated launch spot. Since preparations do not require fuelling the missile, the pre-launch process is quick and difficult to detect, thus, making these missiles much less vulnerable to pre-emptive strike.

Uzi Rubin, the founder of Israel’s missile defense program, assesses Iran will gradually replace its liquid-propelled Shahab missiles with solid-fuelled Sejjil-2 to improve the survivability and agility of their strategic missile forces. Charles P. Vick, Senior Technical Analyst at Globalsecurity.org noted that the external dimensions of the new missile fit in the same logistic envelop as the Shahab-3B, 3C series lands mobile TEL.

Sejjil missiles are covering the entire area of Israel, Saudi-Arabia, Egypt, Turkey and Pakistan, from launch positions in central Iran. Rubin estimates that Iran will be able to extend its missile strike capability to 3,000 km by the end of the decade, with strike capability reaching well into central Europe. Indications of the preparations for a new launch site, much larger than the current launch pad at Shemnan are evident from satellite imagery obtained by Defense Update.

Feb. 3, 2010: Iran has successfully launched a home-produced satellite on the Kavoshgar 3 (Explorer) satellite launcher. The Kavoshgar has already been used for the launch of the first Iranian satellite, the Omid launched a year ago (Feb 2009). The payload on the satellite being launched today included live animals carried in the satellite capsule – a rat, turtles and worms.

The satellite mission included the transmission of life support signals to the ground. Iran is also developing the means to launch heavier satellites into orbit. The heavier satellite launcher dubbed Simorgh will be able to carry a payload of 100-kg into low earth orbit (an altitude of 500 km.) Iran’s space program is considered to provide a coverage for Irans ambitions to develop, test and, eventually field long range and, potentially intercontinental missiles, having the range and payload capacity to carry nuclear warheads to distances extending several thousands of kilometers. Testing of such missiles is not feasible within Iranian controlled territory.

Analysis: Unlike earlier reports hinting at a potential link between Iran and North Korea, the Iranian satellite launcher is not identical to the UNHA 2 developed by North Korea and is believed to be an upgraded version of the Iranian Safir launcher, fitted with an expanded first stage.

The missile comprises two large boosters utilizing the first stage, assessed to be in the diameter of 2,000-2,300 mm based on the Shehab-3B/No-Dong technology, attached to a second stage derived from an extended SAFIR 313, with the diameter of 1,250 mm. The total length of the mammoth missile is 27 meters. Takeoff weight is estimated at 87 tons – 75 tons of the first stage, containing up to 69 tons of liquid fuel. The first stage combines four main thrusters generating 32 tons each, plus verniers collectively generating 143 tons of thrust. The missile is capable of injecting a 100 kg payload into orbit at an altitude of 500 km. Its efficiency is relatively low, and is assumed to be less than 10% of the efficiency of standard satellite launchers.

Based on technical details, Analysts assume that a ballistic missile derivative of Simorgh, although having the potential to deliver a small payload over extended range, is not capable to perform as an intercontinental ballistic missile – as its payload capacity cannot deliver reasonably large reentry vehicle (over 700 kg) to a range of 10,000 km, potentially reaching the U.S.A.

However, Iran is believed to be working on enhanced derivative of the missile, designed to inject up to 700kg payload into orbit, 1,000 km above earth. Such a missile could eventually become a threat to the Continental U.S.A. According to current intelligence assessments, such a missile could be ready within one or two years.