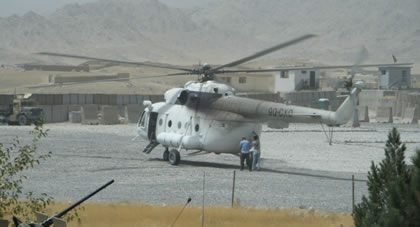 A civilian operated helicopter such as this Mi-8 was crashed at the Kandahar airbase on 19 July 2009 killing 16 and wounding five civilians. Archive photo

A Russian-owned civilian helicopter crashed Sunday July 19, 2009 shortly after takeoff from NATO’s Kandahar airbase in Southern Afghanistan, killing 16 civilian passengers and wounding five. NATO sources reported the helicopter burst into flames when it crashed near the runway only moments after takeoff. The Russian news agency Interfax said the Mi-8 was owned by the Russian air company Vertikal-T but no Russian citizens were involved.

Last week, a Moldova-owned Mi-6 transport helicopter was downed by Taliban fire in southern Afghanistan, killing six Ukrainian civilians on board and an Afghan child on the ground. Civilian helicopters commonly help ferry civilian contractors and supplies to small military outposts across Afghanistan. In a separate incident a U.S. military helicopter made an emergency landing in the Kunar province in Eastern Afghanistan, causing several injuries. Military sources commented that no enemy fire was involved in this incident.

Surprisingly, according to NATO sources, except for a single event – the Moldovan owned Mi-6 shot down last week, none of the recent crashes involved enemy fire. But, whether the Taliban is focusing its action on the more vulnerable civilian helicopters, still remaines an option, as these helicopters are supporting the government and international aid activities and – from the Taliban viewpoint – such losses could have an international effect similar to military losses.