The MOP is a GPS-guided weapon containing more than 5,300 pounds of conventional explosives inside a 20.5-foot long bomb body of hardened steel. It is designed to penetrate dirt, rock and reinforced concrete to reach enemy bunker or tunnel installations. The B-2 will be capable of carrying two MOPs, one in each weapons bay. The B-2 currently carries up to 40,000 pounds of conventional ordnance. For example, it can deliver 80 independently targeted 500-lb class bombs from its smart bomb rack assembly; or up to 16 2,000-lb class weapons from its rotary launcher.
A team from the B-2 manufacturer, Northrop Grumman, MOP produced Boeing has verified that the equipment required to integrate the new Massive Ordnance Penetrator (MOP) on the B-2 will fit together properly inside the aircraft. These include the hardware that holds the MOP inside the weapons bay, the weapon itself, and the hardware used by the aircrew to command and release the weapon. Instead of grounding an operational plane for the test, the team used the B-2 Weapons Load Trainer – a device that simulates the interior size and shape of the aircraft’s weapons bays — and a high fidelity mock-up of the MOP. 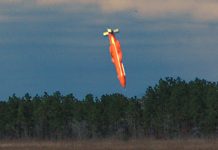