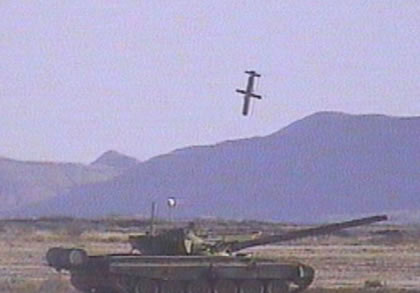 The U.S. Army’s new Precision Attack Missile has recently demonstrated a direct hit on a moving T-72 target. The missile was able to discriminate the tank from other moving vehicles, as it located the target after flying at a distance of 9 kilometers from the launch site.

According to Scott Speet, executive vice president of Prime Contractor NetFires LLC and Raytheon’s NLOS-LS program director, previous guided test flights have succeeded in direct hits against stationary targets. “The ability of the PAM missile to defeat a moving target is a first for the U.S. Army,” said Col. Doug Dever, the U.S. Army’s NLOS-LS project manager. “Once fielded, NLOS-LS is going to give soldiers in the Brigade Combat Teams and sailors on littoral combat ships the ability to precisely engage moving targets – a capability they’ve never had before.”

During the test, the PAM missile joined the network with its onboard radio, operated as a node on the net throughout the flight and sent back a terminal target image to the Advanced Field Artillery Tactical Data System. Anne Johnson, president of NetFires LLC and Lockheed Martin’s NLOS-LS program director added that “this network capability [of the PAM] will provide the Brigade Combat Teams with unparalleled beyond line-of-sight target lethality.”