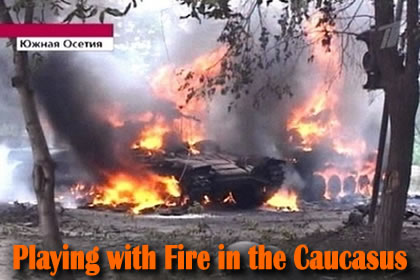 Russia and Georgia have been spoiling for a fight for years. With Russian Prime Minister Vladimir Putin in Beijing for the Olympic opening ceremony and the world’s attention fixed on China, Georgia may have been betting it could pounce on an opportunity to quickly wrest control of its breakaway province South Ossetia. But there may be much more than meets the eye to this. What still seems a local clash, in a remote Caucasus mountain region, which most people never heard of since yesterday’s newsflash, could escalate into a highly serious escalation with worldwide repercussion.

A glance at the map shows why. Georgia sits in a tough neighborhood, shoulder to shoulder with huge Russia, not far from Iran, and astride one of the most important crossroads for the emerging wealth of the rich Caspian Sea region.A U.S.-backed oil pipeline runs through Georgia, allowing the West to reduce its reliance on Middle Eastern oil while bypassing Russia and Iran. On Saturday, August 9, 2008 after Russian Air Force fighter bombers attacked the Baku-Tbilisi-Ceyhan (BTC) pipeline that transfers oil from Azerbaijan to Turkey. Concequently, Azerbaijan announced it has halted oil exports via the Georgian ports of Batumi and Kulevi. Oil flow through the BTC pipeline has been suspended since Wednesday, due to a technical failure in Turkey.

Moreover, Russian politics have become so utterly opaque that it is not easy to say why this particular “frozen” conflict has erupted right now. It may have to do with Moscow’s recent upsurge in its naval and air activities in the Baltic, Atlantic and Arctic regions – demonstrating a comeback of its global strategy, challenging Washington’s resolve in President George W Bush’s waning political tenure.

For a very long time it has been clear that there was a security vacuum created in the strategic Caucasus; that this vacuum was extremely dangerous, especially to US’ vanishing military presence in Central Asia.

It would be only natural to assume that the timing chosen by Georgian President Mikhail Saakashvili would be ideal, counting on surprise to fulfill his longtime pledge to wrest back control of South Ossetia. However, it could actually have been a shrewd move by Vladimir Putin, to perpetrate a perfect situation, challenging Washington over a highly strategic gambit in the remote corner of the Caucasus?

Putin’s move, to send in his tanks to “save” his beleaguered citizens in South Ossetia, was carefully orchestrated in advance preparations. Did his intelligence people give early warning of the Georgian move? Had Moscow’s troops been placed on high alert to move on short command? Previous performances of Russian troops in that region have not excelled in matters of discipline and logistics sofar.

If Putin has planned this move, he imitated another highly skilled political performer –  the late Hafez Assad, who in 1991 during Desert Storm, while sending in his 9th Armored Division to “support” the war against Saddam Hussein – actually invaded Lebanon, while all attention, including Israel’s, was away in the Gulf and held it by force, until his inexperienced son, Bashar, lost it to the “Cedar Revolution” nearly fifteen years later .

Moreover, Putin has to do something to improve his armed forces shameful performance in Chechnya. His approach to the Muslim renegades, sofar, proved quite disastrous. Just as rough is his eight-year Machiavellian ‘pacification’ of Chechnya. Nothing could contribute more to the newly “elected” Russian prime minister, than a short, cheap and brilliantly conducted war against Washington’s ally Georgia – which has been a thorn in Moscow’s eye for a long time .

Indeed, from all its aspects, the conflict in the Caucasus has great strategic importance because it pits one of Washington’s staunchest allies in the war on terror against Russia, a re-emerging superpower with vast energy reserves that is showing growing eagerness to assert its will on the international stage .

But President Mikhail Saakashvili gamble may well be backfiring. Washington will not hasten to endorse Georgia’s attack and it will be hard for Georgia to win a fight with the Russians without outside help. The Russian cards in this ruthless game are overwhelming in their favor over anything the Georgians can put in their way.

Georgia’s armed forces number about 30,000 soldiers, including 20,000 ground forces. They are equipped with some 200 tanks, including 40 totally obsolete T-55s and 165 T-72s, which are currently being upgraded and perhaps still not operational. The ground troops can receive artillery support from 120 artillery pieces of 122 mm and 152 mm cannons, 40 multiple-launch rocket systems, and 180 mortars, totally insufficient against massive Russian firepower. The Georgian Air Force is equipped with five Su-25 (Frogfoot) close support aircraft, 15 L-29 and L-39 combat training aircraft and 30 helicopters, including eight MI-24 attack helicopters. To augment its combat forces fighting back home, Georgia is pulling back its 2,000-strong military contingent from Iraq.

Of course the South Ossetian’s are much weaker, if pitted against Georgia alone and the Russians are perfectly aware of this. According to recent reports, the Russian forces, which have already crossed the border, mount only one armored brigade, with another to follow behind. But if the fighting escalates, the Russian Army could send in much more forces and recapture Georgia as a whole within a week, if they are commanded to do so. In addition to the land and aerial campaign, Moscow has also ordered its Black Sea fleet to group near the Georgian coastline, to enforce a naval blockade preventing Georgia from getting arms resupply from supporters oversaes and prevent possible onslought against Abkhazia, the second Georgian seperatist region.

But a serious forecast of the outcome of this conflict cannot be based on mathematics alone. The Caucasus mountain ridge marking the Northern Georgian border is a rough mountainous land with few passages, where even a very small unit can resist a numerically much stronger enemy. In this case, the outcome of the conflict will primarily depend on the training of forces their fighting spirit and motivation and the influence of third parties.

While the training of the Georgian army, mainly directed by US military advisors, this army is not likely to have changed much in the last two months, but could well prove itself as a powerful guerilla army against the Russian forces, as they enter into their heartland. The painful lessons that the Russians have learnt in Afghanistan (which NATO is still experiencing today) and especially in Chechnya, could be repeated, if the Russian do not achieve all their objectives within a short time and Georgia asks for a cease fire to save it’s independence from total disaster.

It would be a serious mistake for the international community to regard the dramatic escalation of violence in Georgia as just another flare-up in the Caucasus. The names of the current flashpoints may be unfamiliar, the territory remote and the dispute parochial, but the battle underway will have major repercussions well beyond this volatile region. The outcome of this struggle will determine the course of Russia’s future relations with its neighbors; it could alter the relationship between the Kremlin and the West and decide the fate of future energy supplies from the strategic Caspian basin .

Whatever the case may be – it will now be up to Washington’s immediate decision as how to react against Moscow’s confronting challenge. If it waits too long it will lose it’s last hold in the Caucasus and the political repercussions, over a dramatic Russian political coup in that strategic region, could be devastating to the next US administration in it’s Middle East policy.