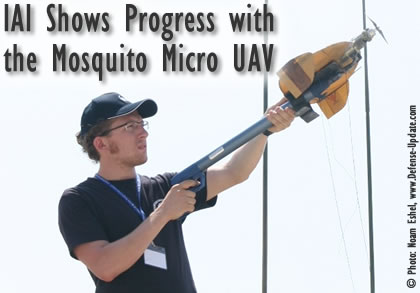 IAI is nearing the first delivery of a prototype version of the Mosquito micro UAV, as part of the technological evaluation of this new concept UAV. Similar to ‘micro class’ UAVs, Mosquito weighs in the sub kilogram range, but unlike other systems scratching the top of the weight class, Mosquito weighs only 500 grams. Nevertheless, it can operate on a 30 minute mission, at distances up to 3,000 meters from the launch point. According to IAI officials the Mosquito can endure winds and gusts up to 25 knots. The system is not new, Defense Update has first reported on the Mosquito in 2005. In the past four years the development of the systemcontinues, alas at a slower pace, lacking a clear customer requirement or market. But IAI’s developers persisted in their effort to improve the system, with encouragement from Israel’s MOD Defense Research & Development Directorate (DR&DD).

Through this evolutionary process the airframe hasn’t changed much, but the system became more mature, as designers gradually implemented lessons learned from much larger systems, while seeking simple, low-cost and lightweight elements to enhance the system, improve its reliability and usability, primarily by operators with the average soldier skills.

Demonstrated publicly in flight for the first time at the 3rd Latrun conference this week the Mosquito was launched by a unique catapult, derived from a common fishing harpoon. This apparatus was modified to launch the Mosquito effectively and reliably. The innovative use of such apparatus corresponds to new requirements emerging from the field. Operational experience with mini-UAVs has demonstrated that most losses of air vehicles are caused on take off and landing, deriving developers to adapt mechanized launch and retrieval systems for small and mini UAVs. 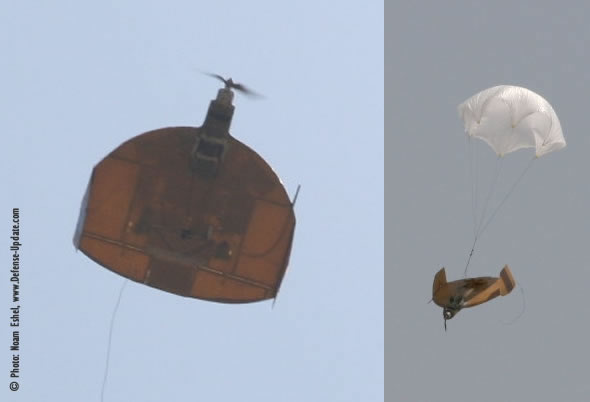 IAI sources indicated that after a thorough examination of different launch systems, including catapults, bungee and hand launch, the harpoon was found to be the most reliable and compact. It also enables the launch of a Mosquito from confined spaces such as armored vehicles, windows or moving trucks. Once airborne the electrically powered Mosquito is silent and virtually invisible as it rapidly climbs to its cruising altitude (commonly set to 100 meters above the surface). From this altitude the micro UAV can effectively collect intelligence ‘over the hill’, directly supporting low echelon users including battalions, companies and special operations forces.

A major development thrust was invested in balancing the weight, endurance and performance of the system, resulting in the use of two rechargeable batteries, sustaining a mission of 30 minutes, or alternative primary (non-rechargeable) power sources increasing endurance by about 25 percent. The Mosquito is equipped with a single electro-optical sensor with a fixed field of view, the installation of the miniature camera enables automatic compensation of the line of sight to the aircraft maneuver, thus improving operability by non specialist users.

To improve the utilization of this asset as an intelligence collection tool, Mosquito can generate a continuous set of images, ‘stitched’ together electronically to combine each of the individual high resolution frames into a mosaic covering a certain area of interest, movement axis or enemy disposition area. The current EO sensor comprises a CCD camera but future operational systems will employ a daylight CCD and/or bolometric (uncooled) IR imager. After the data is gathered, the Mosquito is commanded to reach a retrieval point, where it opens a parachute at a set altitude, determined to bring the micro UAV to the ground at a point where it can be safely retrieved by the operators. The whole system, comprising the mission command and control, two UAVs and communications segment is packed into a briefcase that can be carried and operated by a single warfighter.