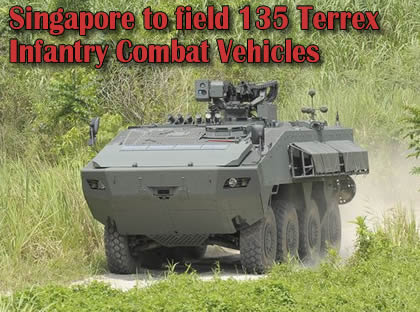 Singapore is fielding the new 8×8 Terrex Infantry Combat Vehicle. The Singaporeans are planning to field at least 135 vehicles, expected to be fielded with all infantry and guards battalions by February 2010. The new vehicle was developed by Singapore Technologies Kinetics and is optimized for urban warfare.

The 24-tonne Terrex Infantry Carrier Vehicle (ICV) is the latest Singapore Armed Forces’ (SAF’s) acquisition, under the island state’s ambitious 3rd Generation fighting force scheme. In recent years the Singaporean army transformed its capabilities with the introduction of new systems, including the Leopard IIA4 tanks, acquired from Germany in 2006 and the Bionix III tracked infantry combat vehicle, fielded a year earlier. Terrex was developed under collaboration between Turkey and Singapore. 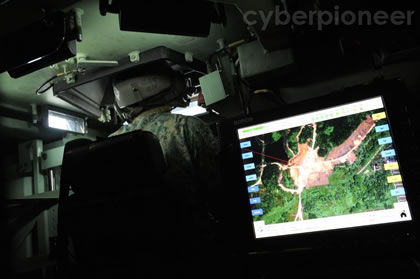 It can carry up to 13 soldiers, inclusive of its driver and commander. The vehicle is equipped with 8×8 independent suspension system and large off-road tyres which enhance mobility over various types of terrain. It can travel at speeds of up to 105 kmh.

The vehicle is equipped with remotely operated weapon station, manufactured in country. It is protected by a modular armor system, which can be enhanced with add-on armor protection suite to provide all-round protection against conventional threats. The Terrex ICV is also designed to withstand mine blasts.

It is fitted with the Battlefield Management System (BMS), facilitating full situational awareness capability for the crew and integration with other combat systems including infantry fighting vehicles, main battle tanks, artillery platforms, attack helicopters and fighter aircraft. The vehicle will also employ a new acoustic Weapon Detection System (WDS) to spot enemy fire sources. (the system can be seen in the photo above, on the aft of the vehicle, just above the ramp door) Threat and target information could be shared with other friendly forces via the BMS network. The Terrex BMS also supports the dismounted soldiers carrying the Singapore Army new breed of infantry combat suites. Supporting and interfacing with the Advanced Combat Man System (ACMS) the vehicular BMS will constantly update infantry troops on enemy movement and location. With a better picture of the operating environment and key battlefield information provided by BMS, soldiers can call for support from air and land forces to coordinate maneuvers and deliver precision fire on enemy targets. 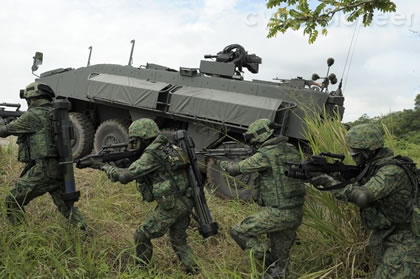