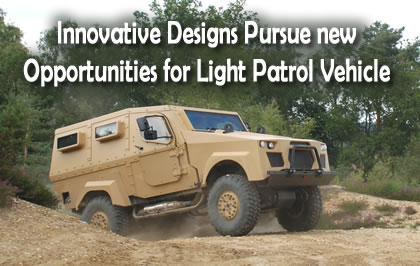 Armored vehicle designers and manufacturers in the UK are scrambling to develop light armored vehicles aimed to replace the lightly armored 4×4 Land Rover Snatch light patrol vehicle, operated by the British forces in Afghanistan. Driven throughout the large countryside on the notoriously IED infested roads of Afghanistan, soldiers riding the Snatch became painfully vulnerable to lethal ambushes and IED attacks, raising increased public scrutiny of the vehicle and its ineffective combat usage. Last February, the MOD Defence Equipment & Support (DE&S) organization started the process to replace the Snatch with an all-protected, yet compact and highly maneuverable, lightly protected patrol vehicle (LPPV). The initial phase will require up to 400 new vehicles to be delivered by 2010-2011.

At DSEi 2009, four companies introduced potential contenders for the new role – Team Z introduced the Zephyr, Force Protection Europe, teamed with Ricardo Inc to market the Ocelot and the new Supacat Protected Vehicle SPV 400 is proposed by the company, that has already fielded the Jackal. A German team formed by armored vehicle manufacturers Krauss Mafaei and Rheinmetall Defense is also pursuing the British LPPV opportunity, proposing their new Armoured Multi Purpose Vehicle (AMPV) – with the first prototype unveiled at the show. The team expects the vehicle to be fully developed in time for the final selection processThe modular design and common, protected chasis was one of the main innovations of the AMPV, as it was launched last year at the ILA airshow in Germany.

In May 2010 the British MoD has narrowed the selection for the future Light Protected Patrol Vehicle (LPPV) to two new designs – the Ocelot, built by U.S. Force Protection International and British Ricardo group, and the SPV-400 developed by the British company Supacat. MOD ordered two exampled of each vehicle for further evaluations, and is expected do decide on the preferred bidder by August 2010.