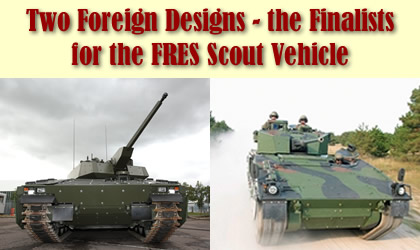 The British Ministry of Defence (MoD) has accelerated the processing of a new contract to procure about 600 armored vehicles as part of the reconnaissance and support vehicles, comprising four variants of the Future Rapid Effect Systems (FRES) family of vehicles. FRES scout vehicle (SV) consists of three Blocks of Reconnaissance vehicles, plus Medium Armor and Maneuver Support. Up to 1,300 could be required in total. Recce Block 1, which consists of Scout, Repair, Recovery and Protected Mobility variants, is the biggest and seen as highest priority.

Two bids for the new program are expected to be submitted in November this year, with selection and contract posssibly signed for the £2 billion program by the first quarter of 2010. For the initial order, the MOD plans to acquire 270 scout vehicles of the FRES SV category. Similar to the previous FRES phase (FRES UV), the British MOD could not find a suitable platform at home, despite the proud history of British tank industry and had to consider only foreign designs for evaluation. The CV90, built by BAE Systems, former Hägglunds division- of the company’s Swedish based operation and the ASCOD-2, developed by the Spanish based General Dynamics’ Santa Barbara operation. If selected, the vehicle will be built in the UK.

The first vehicles are expected to enter service in about 2015, to replace the older Scimitars and Spartans. Originally the FRES program was worth about £16 billion, providing the British Army with nearly 4,000 new tracked and wheeled armored vehicles. However, the initial segment (Utility Vehicle) was shelved last year, while the current Specialist Vehicle has been elevated to a higher priority. Overall, he MOD plans to acquire about 1,300 FRES SV variants.

At DSEi 2009 BAE Systems has unveiled a new configuration of a CV90 series – the CV9035 Mk III Infantry Fighting Vehicle. The basic version of this family of vehicles made first deliveries to Sweden in 1990-1991, with the Dutch Army being the most recent to acquire and field the latest model CV9035 Mk III, with deliveries continuing through 2011.

The British variant proposed for FRES SV utilizes the common CV90 chassis but carries a new turret armed with the new, automatic, 40mm Case Telescoped Weapon System (CTWS) developed by CTA International, a joint venture of BAE Systems and Nexter Industries. The new weapon system will give much greater punch than existing medium-caliber designs against armor, buildings and dismounted troops. The UK-developed turret will allow accurate firing on the move, a first for a medium-caliber vehicle weapon-system in British service. The vehicle is designed for maximum combat weight of 32-35 tons (depending on the configuration), traveling at speeds up to 70 km/h road bound. Armor protection consists of base and appliqué armor. Under a Swedish program, a version of the CV90 has already been integrated with the ADS active-protection system developed by IBD and Akers of Sweden. The British MOD has also selected the ADS to be the future active protection solution for the FRES family of vehicles.

BAE Systems has developed a demonstrator vehicle based on its proposed design, which is currently undergoing evaluation in the UK. “The demonstrator vehicle has allowed us to integrate complex systems and gives confidence that we can meet the demanding UK Ministry of Defence timescales for the high-priority FRES SV program.” BAE Systems FRES SV Campaign Director Arne Berglund said “It incorporates technology and learning from our very successful Manned Turret Integrated Programme 2 (MTIP2) turret program which integrated the CT40 gun, culminating in a successful live-firing demonstration from a moving Warrior vehicle against a moving target. last January.”

Six nations are already operating various versions of CV-90 vehicles, with a total of 1,170 units contracted. BAE is pursuing further potential customers for the vehicle including Canada, Poland and Norway, each having future requirement potential for over 100 vehicles.

General Dynamics UK is proposing the ASCOD 2, an upgraded version of the ULAN vehicle already operational with the Austrian army and its parallel model – Pizaro, fielded with the Spanish forces. ASCOD 2 demonstrates high mobility, survivability and payload, while retaining the capability for future growth. The vehicle is equipped with improved Battle Field Management and Vetronics, and comprises the Bowman C4I tactical communications system.

The first prototype of ASCOD, designated Pizzaro (ULAN) was launched in 1992 under cooperation between the Spanish Santa Bárbara Sistemas company and the Austrian company Steyr Daimler Puch (Austria) – both later became subsidiaries of General Dynamics Land Systems. In 1996 the Spanish Government awarded a contract to Santa Barbara Sistemas to produce the first phase of 144 units (123 Infantry/Cavalry – VCI/C – and 21 Command – VCPC. Eight years later a second phase was launched, with an additional order of 212 Pizzaro units, as part of the Spanish armor modernization program, aiming at building up to 900 vehicles. The Spanish order also addresses new variants – an Advanced Surveillance Vehicle (VCOAV), a Recovery Vehicles (VCREC) and the Sappers (VCZ) vehicle.

The ASCOD-2 is designed for maximum combat weight of 31 tons, accelerating to 50 km/h in 13 seconds. ASCOD-2 has a top speed of 70 km/h with 33 km/h in reverse. The vehicle has a base armor and internal spall liners; it is also prepared for the installation of modular appliqué armor, including reactive armor tiles and counter-IED modules.