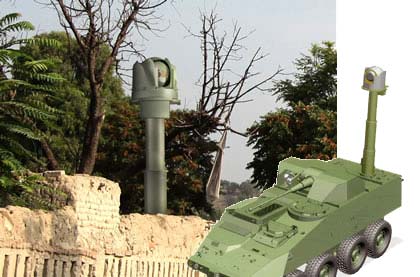 The Mast Mounted System (MMS) developed jointly by Raytheon and Lockheed Martin is a networked sensor suite considered for inclusion as part of the U.S. Army’s modernized Brigade Combat Teams (BCT). MMS enables armored reconnaissance vehicles to acquire and share sensor images and videos across the platoon and up the chain of command. Information generated by the MMS supports both the host platform as well as the platoon’s ‘system of systems’, contributing to a wider ‘common operating picture’ shared across the unit’s elements. The MMS could become part of the proposed Stryker Recce Vehicle. The system is mounted on a five meter telescopic mast, and operated by the crew or remotely, through command and control services or dismounts soldiers.

The processor also performs aided target recognition (AiTR) to automatically and rapidly detect, recognize and prioritize targets of opportunity and military interest in the sensor’s field of view. Advanced algorithms such as Scene Assisted Non-Uniformity Correction (SANUC) are employed to improve image quality at long range. The multi-sensor system operates continuously day and night, in poor weather, and under impaired visibility conditions such as man-made lighting, dust, smoke screens and battlefield fires.