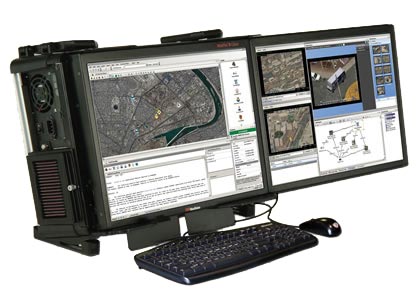 To handle the masses of data and imagery streaming from the field, new tools are developed to assist battalions, companies and platoons to obtain, process and use intelligence and operationally relevant information. Such systems streamline, automate, and simplify tasks undertaken by ordinary soldiers and officers, transforming every staff and Non Commissioned Officer (NCO) to an expert. Such systems are being fielded as low as the platoon level, assisting mission preparation and debriefing, as well as terrain surveying, while at the company level they assist in the creation of better situational awareness and understanding the ‘human terrain’. Operating as network linked services, such systems are effectively supported by networked intelligence services operating at the higher echelons, intuitively suggesting links and relevance of different pieces of information collected from different databases and systems, in search of relevant information. For example, a new application developed under the DARPA Tactical Ground Reporting System (TIGR) program is designed to automate intelligence collection and reporting at the company and platoon. The new application was unveiled by General Dynamics C4 Systems. TIGR is designed as a map-based geographic information system, enabling users can also track dynamic changes with the system – the data TIGR uses is dynamic information – new structures being constructed, destroyed bridges or new obstacles. TIGR manages this dynamic tactical landscape using before/after photos and updated imagery to provide an up-to-date view of the battlespace. As a networked system, TIGR accesses many servers over the military global information grid, enabling users to receive information from multiple sources, and understand the context of local events within the ‘big picture’. The system is designed primarily for counterinsurgency operations, enabling collection and dissemination of fine-grained intelligence on people, places, insurgent activity and understanding the ‘human terrain’. Meetings with religious leaders, encounters with local villagers or business owners can be recorded and shared in TIGR. The system has been tested this year in Afghanistan and is scheduled to be fielded to more units in 2010.

Another system, soon to be fielded with engineers teams and platoons is the ENFIRE Instrument Set, Reconnaissance and Surveying system, developed by Northrop Grumman. The system is designed as a map-based reporting system, supporting the processing of engineering field reconnaissance – currently done in a complex, manual process reserved only to few skilled professionals. Designed under the guidelines of the Army’s ‘Every Soldier is a Sensor’ (ES2) initiative, the system enables engineering reports to be created by infantry squads equipped with the ENFINE kit. The system employs several lasers, GPS position locators and tablet PC and other devices, assisting the team in recording and measuring roads, bridges and obstacles, charted on digital maps that update the ‘terrain’ information layer displayed on the unit’s digital situational map. 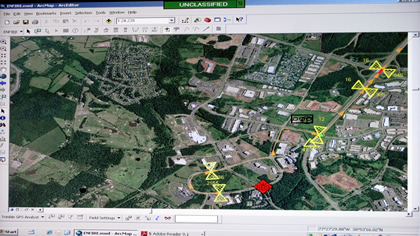 Company Intelligence Support Team (CoIST) system, developed by Textron Systems’ subsidiary Overwatch of the Textron Group are being employed to manage and exploit this information, to better assess asymmetric threats in the area of operation (AOR), by mapping events, behavioral and social activities, highlighting patterns and links with potantial intelligence value. Utilizing diversified sources such as signals intelligence and identification information gathered in routine roadblocks and traffic checks, tracking and intercept of mobile phones, CoIST gathers and analyzes information with cross-reference with patrol reports and ground sensor data, through the integration with TIGR system and current messaging and reporting systems. CoIST maintains a local, sharable database of trackable entities such as people, events, vehicles, phones etc,. Based on this information, the system builds formatted high value target intelligence packages within seconds, assisting time critical actionable decisions.

Other systems, such as the NetReveal services developed by BAE Systems’ subsidiary Detica provide intelligence agencies an automatic processing and access to huge volumes of information. The system enables analysts and investigators to study associations and links between objects of varying formats and origin, gaining an insight and develop situational awareness and understanding in rapidly unfolding scenarios, where large volumes of inbound, multiple format intelligence is arriving against a historic back drop of millions of data items and reports. NetReveal identifies and highlights entities over multiple domains, for example, correlating between two groups of people who called a certain phone number and drove a specific car – two sets of events that are not linked to each other but together, create a ‘network’. The system automatically generates such ‘networks of intelligence’ using free text, structured and unstructured data. All elements are correlated with geospatial and time dimension to enable ad-hoc analysis of historic and current information, mined from every accessible sources, including human intelligence and open sources. This process dynamically suggests associations between entities, highlighting links or anomalies, unveiling underlying trends that analysts have not been aware of before.