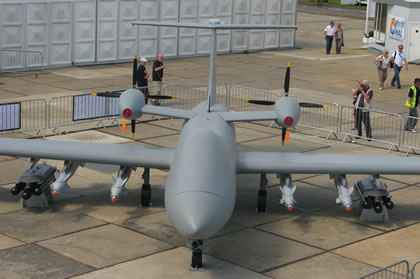 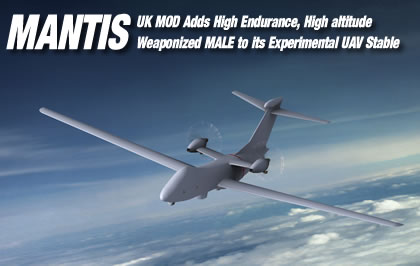 By October 2009 the Mantis completed the first series of test flights and await sfunding approval to proceed to the next phase.

According to BAE Systems, the twin-engine Mantis platform and associated ground control infrastructure is already underway, with ground testing planned for later this year, leading to first flight by early 2009. The initial phase will be focusing on persistent ISTAR applications, ‘Spiral’ II on multi-sensor applications while weapons capabilities performed in Spiral III.

The aircraft will be able to carry weapons on six under-wing stores. Possible weapons load Include up to six Paveway size guided weapons, or 12 brimstone missiles, in addition to two Electro-optical (EO) payloads and a Synthetic Aperture Radar (SAR). It will be capable of operations extending over 24 hours. Although BAE Systems did not elaborate on specific performance, it is assumed that the Mantis is designed for medium and high altitude operations from 25,000 to 50,000 ft, supporting the warfighter through a range of direct support roles, among them persistent ISR and attack of “short lived” time critical targets.

The powerplant used for the first aircraft is the Rolls Royce RR250B-17 but, according to Kane, final decision on te specific type and maker of the engine to be used in serial aircraft will be made later in Spiral I. current According to BAE Systems, the development will be based on several steps (‘spirals’) which contribute to an accelerated development cycle. “We plan develop the Mantis from a blank page into a flying unmanned aircraft in 15 months” said Mark Kane who leads the Company’s UK UAS activities.

“The rapid development of Mantis will provide indicators of how we can improve the acquisition process to deliver capability swiftly into the changing military environments” said Air Vice Marshal Simon Bollom, Director General Combat Air at the British Ministry of Defense. “We expect to see positive early results before deciding about further investments in a longer term program’ he cautioned.