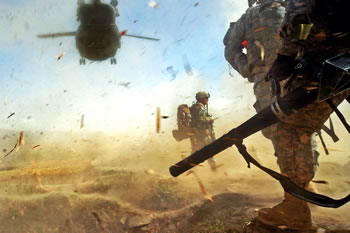 U.S. Army paratroopers prepare to load into a CH-47 Chinook helicopter during an air-assault mission to detain a known militant in the Bermel district of Paktika province, Afghanistan, Oct. 13, 2009. U.S. Army photo by Pfc. Andrya Hill (This photo is not related to the accidents reported above)

Three helicopters crashed today in Afghanistan claimed 14 lives and 25wounded. According to information provided by ISAF the helicopter was supporting a search mission over a suspected compound in the Darabam district in the north western Badghis province, where the U.S. Drug Enforcement Administration (DEA) is engaging insurgents conducting narcotics trafficking. In a separate incident two U.S. Marines helicopters were involved in a mid-air collision during a night mission.

Late night on October 26, 2009, a combined team of Afghan and international forces and U.S. Drug Enforcement Agency (DEA) members was conducting a mission to disrupt arms smuggling and narcotics trafficking in the Darreh-ye Bum Village in the Afghan province’s Qadis district. Finances from these illegal activities provide support for the insurgency. The mission developed into a heavy firefight killing 12 insurgents.

On leaving the area, one of the Boeing MH-47 helicopters supporting the operation went down killing ten of the passengers, and wounding 23 Afghan troops, U.S. soldiers and one DEA agent. Among the wounded 14 are Afghans, eight U.S. soldiers and one DEA agent. The Taliban has claimed it shot down a helicopter in northwest, but this has not been verified but U.S. sources claim that Militants did not fire at the helicopter at any point during the departure or crash.

According to information released by the U.S. Defense Department two days later, the cause for the MH-47 crash was a combination of factors caused by very low visibility. According to the Pentagon, the incident occurred about 3:30 a.m. when the helicopter lifted off following a successful operation against militants. Thick dust stirred up from the initial takeoff and overwhelmed the visibility of the helicopter crew (brownout condition). As the crew tried to correct the aircraft’s movement, it struck a tall structure, causing it to crash.

The second incident involved two U.S. Marines helicopters involved in a mid-air collision on a night mission over the southern Helmand province. The accident involved a UH-1 Huey and an AH-1 Cobra attack helicopter. Four Marine aviators were killed in this accident, and two were wounded.

The Challenge of Combat Flying at Night

The following video depicts some of the difficulties of helicopter combat night flight. Flying over Iraq, the scene is usually well illuminated, enabling pilots equipped with ANVIS night goggles to have effective situational awareness. In the vast empty deserts of Afghanistan, the nights are much darker and NVG provides limited night vision, therefore, aviators usually employ various illumination devices to mark the helicopter’s rotor disc and position.