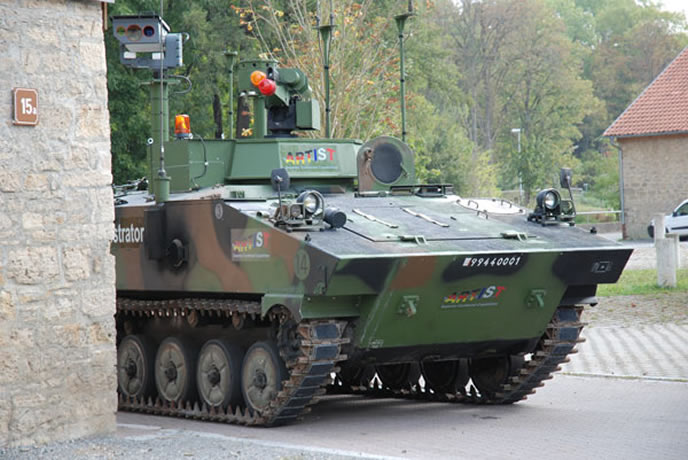 A recent field experiment held by the French and German forces in Germany evaluated advanced warfighting concepts introduced by modern command, control, intelligence and weapon systems, paving the way for further studies as part of the Air-land operational digitalization study (Bulle Opérationnelle Aéroterrestre – BOA). The ARTIST experiment was managed by the French Defence Procurement Agency (DGA), the French Army, and an industry group including Thales, Nexter and Sagem.

The forces operating in the experiment included a command centre, four armored vehicles, three types of robots, a drone and two groups of soldiers, demonstrating the effectiveness of the battlefield digitization in combat mission in a built-up area, addressing intelligence preparation and reconnaissance of a village, seizing a village and repelling an enemy counter-attack.

For the experiment the units were equipped with an advanced, all-digital tactical communications system provided by Thales, connecting different units (vehicular and dismounted) providing full coordination between the French and German units, in voice, data, maps, video and fire coordination.

The vehicles included the German Wiesel II tracked light vehicle and the AMX10 VOA platform and , specially equipped with advanced armored vehicle vetronics systems provided by Nexter Systems. This electronic ensemble included battle management, observation and target acquisition systems, enabling the crew to perform observation and engage targets through a specialized Man-Machine Interface. The vehicles were also equipped with the Robot Spotter robotic control systems, provided by the French company Robosoft, enabling the control of unmanned ground vehicles such as the wheeled Miniroc and tracked Telemax, from within the armored vehicles.

Sagem provided the basis for the operational command and control segment, with a system designed to integrate with both German and French land forces combat command systems, including performing information exchange with the FELIN, employed by French infantry warfighters. Sagem has also provided multi-screen, multimedia work stations providing for the exercise control.

The BOA, performed under close partnership between the DGA, the French Army and the Thales-Nexter-Sagem industrial group was launched in 2006 to demonstrate to the Army how digitization can transform the modern battlefield. Three field experiments being conducted in the current phase (TACTIC) are scheduled to continue until 2012. ARTIST (or Architecture Real Time Integration System Testbench) was the first of the three, demonstrating the basic added value of digitization. Lessons learned from BOA will pave the way for the future force modernization, under the French Army SCORPION program.