By the end of 2009 the Joint Light Tactical Vehicle Program Office expects the three contractors to provide technology development and demonstration vehicles and associated equipment for performance and reliability testing by U.S. army, Marines and Special Operations Command users. According to Kevin Fahey, Army program executive officer, the current evaluation phase is designed to assess the maturity and integrability of the different technologies submitted by the three industry teams selected for the demonstration. Following the 27 month program a production decision is expected by the end of 2014, with full-rate fielding to begin in 2016. 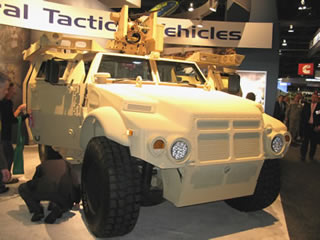 The program has received a lot of international attention, too. Australia and India both signed agreements to provide development support and share the associated costs, and other countries have expressed interest in participating as well. Israel, Canada and the U.K. are also following the program closely.

Earlier in November 09 the models designed by General Tactical Vehicles (GTV), the joint venture between GDLS/AM General has successfully completed the Critical Design Review (CDR). GTV was the first JLTV contractor to meet this milestone, enabling them to proceed to the production and testing of the vehicles and trailers scheduled for delivery for the U.S. government by spring of 2010. Second to pass CDR was the BAE Systems/Navistar team completed this milestone. The BAE Systems-Navistar team has developed two JLTV prototypes for internal testing that have provided valuable information being used in the CDR. Their JLTV design also incorporates lessons learned from the deployment of MaxxPro and RG33 type Mine Resistant Ambush Protected (MRAP) vehicles, being produced by the two partners. Next, in line is the Lockheed Martin, expected to complete the process soon.

JLTV will arrive in time to modernize the U.S. military tactical vehicle inventory, which is riding today on the 40 years old HMMWV designs back in the 1970s. The military’s fleet of Humvees, estimated at about 160,000, was developed in the 1970s and delivered in the early 1980s. It was the first example of the ‘family of vehicles’ approach, replacing a number of light and medium vehicles with a common platform designed with high mobility, effective payload capacity and modularity, providing a common platform for utility, liaison, patrol, and mission-specific roles. Although it had the capability to apply light armor for combat missions it was never designed to survive as a direct combat vehicle.

When these vehicles proved vulnerable to roadside bombs in Iraq and, increasingly, in Afghanistan, the military responded by applying armor plating, bulletproof windows, protected weapon stations and electronic defensive equipment that overloaded the vehicle’s engine and electrical supply. This evolution brought the typical Humvee from the original designed maximum gross vehicle weight (GVW) of about 12,000 pounds, closer to 18,000 pounds. The vehicle is way overweight, underpowered, lacking the mobility is was designed to provide and does not have the payload to do its missions.

On the other end of the weight scale is the MRAP behemoth, which was bought off the shelf, rapidly fielded and being improved and modified to meet the shortcomings and limitations that evolve through operational use. Currently being deployed to Afghanistan are the lighter weight variants of the MRAP, known as M-ATV. While being more adaptable to the rough terrain, these truck based vehicles are much heavier and limited in their growth capacity, compared to the planned JLTV.

In contrast to the rapid evolution of the Off-The-Shelf MRAP that focused primarily on protection, and left the other aspects for future improvements, the military is taking the time to design its next generation vehicle to meet the user’s current and future expectations in operational use, while focusing on reliability and maintainability and commonality.

Fahey emphasized the benefit of designing the next-generation light tactical vehicles from the ground up for their specific use rather than simply being adapted to meet operational requirements. The biggest challenge in a joint program, Fahey said, is agreeing to a common set of requirements. The Marine Corps puts the highest emphasis on making the vehicles lightweight to meet its mobility requirements. The Army tends to focus more on troop protection.