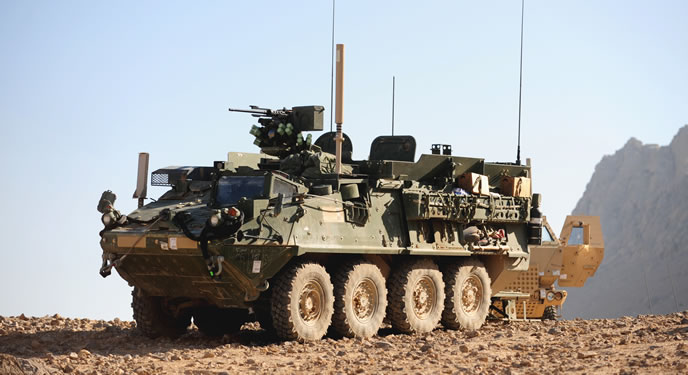 General Dynamics Land Systems will design a modernization of the Stryker infantry armored vehicle under a $203 million modernization contract awarded by the U.S. Army has awarded TACOM Lifecycle Management Command. to design the Stryker of the future. The current increment phase of $42.6 million was awarded November 25, 2009. The award continues the Stryker modernization program, initiated last year.

The Army is interested in enhancements that include crew-protection technologies, increased power, mobility, agility and information connectivity. The current funding will pay for the development of a demonstrator testbed, evaluating new technologies.

For example, the integration of a new diesel engine rated at 450 horsepower and upgraded suspension will demonstrate how the total power, on-board available power and off-road mobility can be enhanced. The suspension, driveline larger tires and a new braking system will also be upgraded to carry up to 60,000 lbs gross vehicle weight. GDLS will also introduce a digital architecture system that connects new command, control, communication, computers, intelligence, surveillance and reconnaissance technologies, to ensure soldiers continue to have access to the best available situational-awareness and mission systems.

The Army has seven Stryker Brigade Combat Teams, three of which are deployed in combat zones: two in Iraq and one in Afghanistan. To date, General Dynamics has delivered nearly 3,000 vehicles and trained more than 19,000 soldiers in their use. Stryker Brigade Combat Teams have operated with historically high mission availability rates in Iraq since October 2003, demonstrating the value of a force that can move rapidly as a cohesive and networked combined-arms combat team.