By 2017 the Ground Combat vehicle is expected to begin replacing the M2/M3 Bradley Infantry Combat Vehicle. At a later stage it could also be configured to address other mission packages. The following chapters outline some of the aspects of the program, defined by U.S. Army Vice Chief of Staff General Peter W. Chiarelli,as the most important combat development and acquisition decisions we will make over the next seven years”.

Protection and Mobility – the Highest Priority

GCV should meet the protection, network and mobility requirements in a single vehicle, designed with growth potential and be capable to adapt as the technology matures and enemy learns, and operate effectively across the full range of military operations. While the protection of the MGV was based, in part, on hit avoidance, mobility and area dominance – hence, it could excel mainly in open terrain – the GCV will have good cross-country mobility similar to the Bradley, with a baseline requirement of 30mph off-road speed (compared to the Bradley’s 28mph). However, it will offer superior survivability and performance, particularly operating in confined spaces like in urban combat. The Army would like its future GCV to have the blast protection level equal to the MRAP, improving its current protection, particularly against large IEDs. Base level protection of the vehicle could vary, and will be scalable to threat and mission. Emphasis will also be given to crew and troops protection, through an enhanced ‘force protection’ package which will address survivability from blast, fire protection and other aspects. Overall, the protection and survivability of the vehicle should be equal to or better than any current combat platform.

A unique feature of GCV will be the situational awareness provided by full 360° observation from within the vehicle, and the hemispheric protection utilizing ‘hit avoidance systems’ – new features currently unavailable in most armored vehicles. Providing enhanced protected mobility to warfighters means soldiers can dismount vehicles closer to the objective, an attribute that can be translated to reduce individual combat loads, lighter body armor, availability of firepower, networking and equipment closer to the dismounted troops. Mission survivability is also becoming an important factor in the GCV design, with its electronic systems and networking designed to retain mission functionality, even when network support is degraded or interrupted.

Supporting open architecture networking is not a futuristic vision, says General Chiarelli, it is essential today, to enable troops to operate in formation with other units and within coalitions with other services, international alliances and with non- military agencies.

According to Col. Brian McVeigh, Product Manager for manned systems integration, the networking connectivity should enable task organization at the lowest levels, while better supporting the integration of assets from echelons above the brigade, to increase combat power and effectiveness of the small combat units.

The networking aspect of the new vehicle has not been detailed yet, but according to an earlier assumption, it will not be designed to operate the FCS System of System Common Operating Environment (SOSCOE), since the computing and power requirements of that system are far beyond those slated for the GCV. The current requirement is to support the Army Battle Command Network Systems, integrate and support soldier systems and ‘provide access to joint capabilities’. For example, the system should support integration with unmanned systems, integrate mounted warrior systems, and supporting dismounted networking providing adaptive access points and connectivity to remote and dismounted elements. 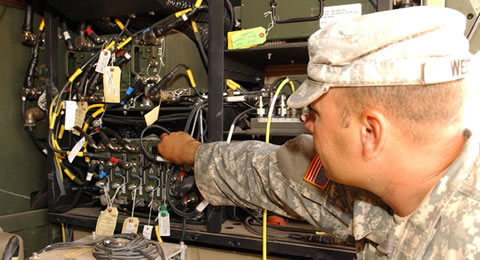 As a new and modern vehicle the GCV should deliver higher sustainability levels and consume less fuel than the Bradley or other vehicles of similar weight and power. The Army requires it to meet the availability rates of the current Stryker. The new vehicle should also provide for adequate exportable power to sustain on-board systems, battery charging for soldier systems and other external applications.

Outlining the vehicle’s Operational Design Principles (ODP), Col. Mike Smith, Director of the Mounted Requirements at the Army’s Maneuver Center of Excellence emphasized some of the new capabilities the Army expects from the new vehicle. Transportability is an important requirement that was somewhat neglected in recent acquisitions. Although overall dimension and weight are dictated by air, sea, highway, and rail restrictions, the Army has decided not to limit the vehicle by the dimensions of the C-130, which, in the past, have restricted many designs. Therefore, air mobility will be provided by much more spacious C-17s. Nevertheless, the vehicle design should maintain modular and reconfigurable concept to support different lift assets and mission profiles.

Not much has been publicized regarding the weaponry to be used but apparently, unlike the Bradley or MGV, the GCV is not designed for a balanced firepower – mobility – protection triad and is not emphasizing kinetic capabilities. The three-man crew and the inclusion of dual-sight configuration hints at a baseline turreted configuration, yet the type and caliber of the primary and secondary weapons are still classified. The Army has only stated that the weapon suite will comprise of lethal and non-lethal means to maintain freedom of operation through a wide range of combat environments, including urban terrain and among civilian population.

As explained by Col. Smith’s statement, the GCV’s lethality will be derived from its capability to operate distributed assets, mixed formations of different platforms and the integration with assets provided by other elements. These could become guided artillery, precision attack missiles, guided mortar fire or weapons delivered by aircraft, helicopters or unmanned systems. As more variants are developed, different configurations of the GCV will be armed to defeat similar enemy vehicles – armored infantry vehicles and weapon carriers of different types, but this capability will also be considered primarily for self protection – the offensive aspect of the GCV firepower is the precision of application of combat power delivered by supporting elements.