General Peter W. Chiarelli, Vice Chief of Staff of the U.S. Army describes the new Ground Combat Vehicle (GCV) “the most important combat development and acquisition decisions we will make over the next seven years”. Indeed, the Army is taking this program seriously, and is doing its best to safely conduct it to successful completion. Top Army officials gathered in October and November 2009 have outlined the program to hundreds of experts from industry, research and development community to introduce the program set to dominate the market through this new decade.

Following the briefings the industry responded to the Army’s request for information, delivering over 150 ‘white papers’ that discuss the manufacturer’s views of the feasible approaches that could meet the Army’s requirements. The Army is expected to publish the Request for Proposal (RFP) in February and, based on industry responses, award two or three contracts for prototype development by late 2010. 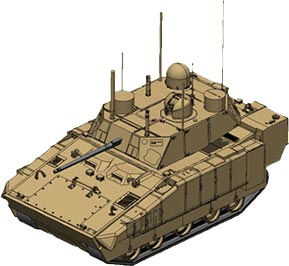 This program is not going to be short, or cheap. After the demise of the Future Combat System’s (FCS) Manned Ground Vehicle (MGV shown in the drawing above), the Army is embarking on a program less ambitious, but also more connected to the new realities of modern military requirements. According to General Chiarelli, the focus is on improving warfighter survivability while maintaining decisive advantage over the adversaries, through the ‘superiority of the network’. To sustain this advantage over many years, the new vehicle should be based on ‘open architecture’, primarily in the use of electronic systems, enabling ‘plug and play’ enhancements and future growth.

Can GCV Benefit from MGV Legacy?

The Ground Combat Vehicle will differ from the MGV in many aspects. According to Col. Brian McVeigh, Product Manager for manned systems integration, the Army is still seeking a ‘balanced’ design but with an emphasis on system survivability for vehicle and crew (defined as ‘force protection’), mobility and versatility over its entire service life. McVeigh was the program manager of the MGV and, since the establishment of GCV program as a Major Defense Acquisition Program (MDAP) is heading the new vehicle program. McVeigh confirmed the new design could leverage part of over US$3 billion invested in the development of the FCS family of vehicles. In fact, over 40+ specific technologies were identified as mature enough for integration in the GCV and will become available to the industry.

Such derivatives could be address broader system architecture and design perspective, as well as software and hardware elements matured through testing and development. While the design and development is expected to be more linear and straightforward than the MGV, McVeigh expects some side tracks for evaluating specific technologies in parallel to the vehicle’s development. Some technologies could also be integrated as they mature, in future incremental updates, through the service life of the vehicle. These could include advanced propulsion technology, future networking solutions, situational awareness appliqué, turret and weapon systems and selection and integration of the future hit avoidance systems (HAS). Such active and passive protection measures will be integrated with the vehicle when they are ready.

Other important elements are transportability, safety and mobility – lessons learned from the Mine Resistant Ambush Protected (MRAP) vehicle program. To avoid the pitfalls experienced with the MRAP, the GCV should be designed with manageable gross vehicle weight, and provide for adequate payload capacity in the near term and growth potential, and have automotive characteristics for on road and off-road mobility, stability, handling and safety. Cross-country mobility is expected to equal the Bradleys’ and is considered primarily to preclude being restricted to existing road networks, rather than sustaining maneuver warfare in open terrain.

The Army is assessing the capability gap with its current and future vehicles to provide the baseline for revising its requirements for the future vehicles. The Army is expected to maintain enhanced versions of the M1A2 main battle tanks, the Stryker Infantry Combat Vehicles, and some of the Bradley Infantry Fighting Vehicles (IFV). The Army is considering different approaches to phase out the M-113 Armored Personnel Carriers, which could involve utilization of MRAPs as well as the introduction of utility versions of the new Joint tactical Light Vehicles (JLTV).

According to Col McVeigh, the army is seeking the replacement of the Bradley with the GCV, at a later phase; its capabilities could be expanded further, to other mission packages. This approach is less radical than the MGV ‘family of vehicle’, developed from the baseline as a ‘networked combat vehicle’ which could be operated by a crew of two. The GCV takes a step back into reality – being less complex it will be manned ‘traditionally’ by a crew of three, with space for additional nine infantrymen. It will be equipped with advanced vehicle electronics, but integrate the current generation of command, control and networking systems. These could be upgraded incrementally in the future to take advantage of next generation networking solutions as they become available.