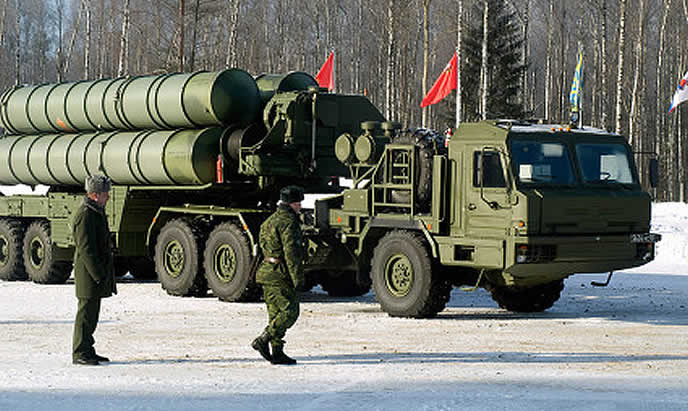 Photo above: One of two S-400 fire units arriving to joint the air defense regiment at Elektrostal, in the Moscow Region. Photo: Novosti

The Russian S-400 Triumph air and missile defense system was officially inducted into Russian army service – the first two systems have entered operational service with the air defense regiment stationed at the Military Space Defense joint command in Elektrostal, the Moscow Region with additional two scheduled to be deployed by the end of 2010. More systems will be delivered later, along with next generation S-500 currently in early development stage. The Russian Air-defense command is hopeful to achieving full operational capability protecting strategic sites throughout Russia with the new systems by 2015.

The S-400 started its way in 1999 as the S-300PMU3, developed by Almaz Science and Production Association. Russian defense officials claimed in 2006 the missile has been inducted in late 2006 and was due to become operational later in 2007. Suffering from teething problems, this milestone has been delayed three years, allowing designers to work on the ‘baseline system’, awaiting the completion of the full capability version, by early 2010. Russia plans to buy up to 200 launchers (each with four missiles) by 2015, and phase out the older S-300 and S-200 systems. This would mean deploying at least 18 battalions in the next six years, and perhaps more than twenty.

Triumf, a new air defense missile system based on the heritage of the S-300 is considered one of the world’s most advanced SAM, is capable of destroying any air target, manned and unmanned, as well as cruise and ballistic missiles, within a range of 400 kilometers (250 mi) and an altitude up to 30 kilometers. It is capable of intercepting medium range ballistic missiles (fired from distances up to 3,500km). According to James Dunnigan at Strategy Page, the missile weigh 1.8 tons and is eight meter (26 feet) long and about 50 cm (20 inches) in diameter. The missile can hit targets as high as 100,000 feet. It has a 145 kg (320 pound) warhead. The S-400 system actually has two missiles, one of them being a smaller, shorter range (120 kilometers) one and the other, designed for long range engagement and missile defence.

The S-400 is considered effective against all types of manned and unmanned aerial targets, including ‘stealth’ aircraft and Early Warning and Control (AWACS) and other electronic support platforms flying hundreds of kilometers from the protected sites. The system is claimed to be three times more effective than its domestic or international counterparts. Since Moscow have added the S-400 to its export portfolio last year, several countries expressed interest in the system, among them Saudi Arabia, Turkey and Gulf countries.

Field transportable, the S-400 Triumf can be rapidly deployed. The system comprises two radars – an area search and target acquisition radar and separate fire control radars. Other elements include the command and control vehicle, communications segment and fire units, carrying four missiles each. The missiles are vertically launched from the launch containers. The S-400 radar, command and control and support vehicles share similar automotive platforms with the S-26 Iskander M while the fire unit employs an independent, eight wheel bed hauled by a 4×4 truck. Unlike its S-300 predecessors, the Triumf is equipped with an active, homing seeker and therefore, can be employed beyond the range of its guidance radar. The target acquisition radar has a range of 700 kilometers.

Russia is also working on a new class of air defense systems, designated S-500. The new system development is expected to be completed by 2012. The missile is designed to intercept primarily medium range missiles – what Russia considers ‘a new type of threat’. The S-500 is expected to have an extended range of up to 600 km and simultaneously engage up to 10 targets. The system will be capable of destroying hypersonic and ballistic targets. S-500 will be a successor of the S-300 developed in the 1990s and operate in tandem with the S-400 currently entering service with Russian air defense forces.