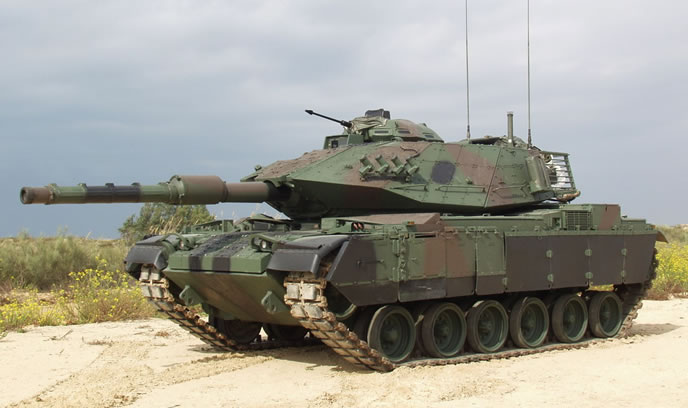 Israel Military Industries (IMI) has delivered the last of 170 upgraded M-60A1 tanks to the Turkish Army. April 7, 2010, at an official ceremony held at the 2nd Turkish Army Depot at Kayseri, Turkey – the location in which the tanks underwent upgrading work in recent years. IMI is the prime contractor for the $687.5 million project, considered to be one of the world’s largest tank upgrade programs, bringing the M60A1 tank to level of the world’s leading main battle tanks.

In 2002 Turkey and Israel embarked on the multi-year program to modernize 170 tanks. The project also included establishment of training and logistic support infrastructure, and transfer the technology to local industries enabling local production of part of the systems. The modernization of the 1960 vintage M-60A1 transformed the tank into a modern weapon system, integrating modern and combat proven protection, firepower, propulsion and vectronic systems. The design implemented in the Turkish program utilized systems already proven in modern armored vehicles in service with the IDF, such as the merkava 4 main battle tank.

Through the upgrade program the tank’s original 105mm rifled gun was replaced with a new 120mm smooth bore gun, all-electric turret drive, sophisticated optronic and fire control systems. The armor suite was enhanced with advanced hybrid armor system protecting the crew. A modern powertrain was also introduced, including a more powerful 1000 hp MTU diesel engine with matching transmission and final drive from Renk, both from Germany, and advanced suspension system derived from the Merkava design. The modernized tank has undergone extensive testing and qualification performed in Israel and Turkey, by Turkish test and evaluation teams, supported by IMI and the program’s subcontractors.

The production line established at the 2nd MMC (depot) in Turkey was modernized with the latest production methods and unique machine tools necessary to support the program. Israel Military Industries (IMI) is the prime contractor for the program, leading a team of subcontractors that include Elbit Systems, as the system integrator of the electronic systems, Urdan Industries and Orlite, providing part of the armor modules, and Aselsan and MKE from Turkey which operated alongside IMI to facilitate local support for the systems.

IMI was hopeful that the Turks will continue to upgrade more M-60A1 tanks under the program. However, in parallel to the Israeli led program, Turkey has been upgrading 171 Leopard 1 tanks and acquired 298 surplus Leopard 2A4 tanks from Germany, therefore fulfilling their immediate requirements for main battle tanks. Turkey has more than 1,000 additional tanks of the M60A1/Leopard 1 models that could be considered for future modernization. For the future acquisition Turkey has embarked on an ambitious program to develop and produce the Altai, a modern main battle tank, based on South Korea’s latest Black Panther MBT design.

Turkey and Israel have agreed to pursue foreign markets for new opportunities in tank upgrading. At the closing ceremony the Turkish Defence Minister H.E. M.Vecdi GÖNÜL referred to the advanced technologies implemented in the upgraded tanks, noting the cooperative agreement signed between Israel Military Industries and Aselsan of Turkey will contribute to further collaboration on future programs in foreign countries. IMI’s Chairman Avner Raz expressed his confidence that the cooperation established between the two countries and industries will lead to more opportunities in the future. One opportunity being discussed is a tank modernization planned by the Columbian Army. Major General Luis Alberto Ardila, Second Commander and Chief of State of the Colombian Army has visited Turkey to inspect the modernized tank. 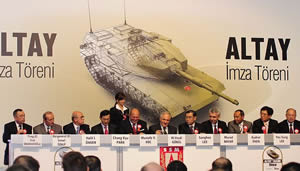