Home Regional News Europe Watchkeeper is Flying in the UK 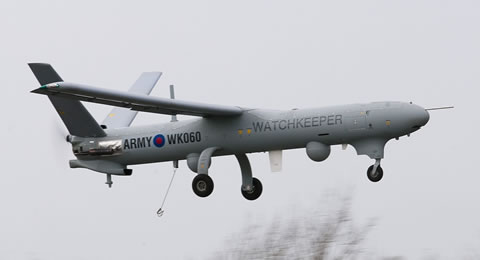 The Newest British UAV is Scheduled for Delivery Later in 2010

Watchkeeper, the newest unmanned aircraft to join the ranks of the British Army performed its first flight in the U.K. on April 14, 2010 at Parc Aberporth in West Wales. TheParc Aberporth facilities, managed by QinetiQ through the West Wales Unmanned Air vehicle (UAV) Centre, are the premier test facilities for UAVs in the UK.

Performing the first success flight is the first milestone in the UAV induction of the Watchkeeper system with Army units, demonstrating that the vehicle and its system meet the robust safety and airworthiness criteria required to fly UAVs initially on ranges and segregated airspace in the UK. Thales UK, the system integrator and prime contractor is scheduled to deliver the first Watchkeeper systems to the MOD this year. Photos: Thales UK

“2010 is an important year for the program as it will also see the opening of the Watchkeeper training facility based in Larkhill, and the continuation of the technical field trials at Parc Aberporth” Alex Dorrian, CEO of Thales UK added. “Building on lessons learnt on current operations, Watchkeeper will also soon be an invaluable asset for commanders on the ground.” Dorian added. Thales UK, as Prime Contractor for the Watchkeeper program, will deliver equipment, training and facilities, with the capability being delivered to the MoD customer from late 2010. Production of the Watchkeeper system will take place at U-TacS (UAV Tactical Systems Ltd), the Thales UK and Elbit Systems joint company, based in Leicester.

Watchkeeper is a high-performance multi-sensor, all-weather UAS that can remain airborne for over 16 hours in a single mission. It includes a high degree of automation, with automatic take-off and landing (ATOL), and has a de-icing capability, to expand its ability to operate in all weather / operational environment. Delivered in a dual-payload configuration, the system includes enhanced electro-optic / infrared sensors, with laser target designator, as well as an advanced I-Master synthetic aperture radar / ground moving target indicator radar. 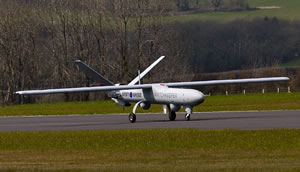 Until the Watchkeeper is fielded, the Army relies on the services of fleet of leased Hermes 450 unmanned air vehicles (UAVs) operated by Thales UK offering the MoD customer an innovative ‘ISTAR-by-the-hour’ contract. Since the contract award, in July 2007, these Hermes 450 UAVs have flown more than 30,000 operational hours in over 2,000 sorties, supporting UK forces in current operations, primarily in Afghanistan. The company launched this service in response to an Urgent Operational Requirement (UoR) contract issued by the UK Ministry of Defence (MoD), and will run through to contract completion in October 2010 which could potentially be extended until April 2011 when the H-450s will be phased out as the Watchkeeper delivers frontline capability.