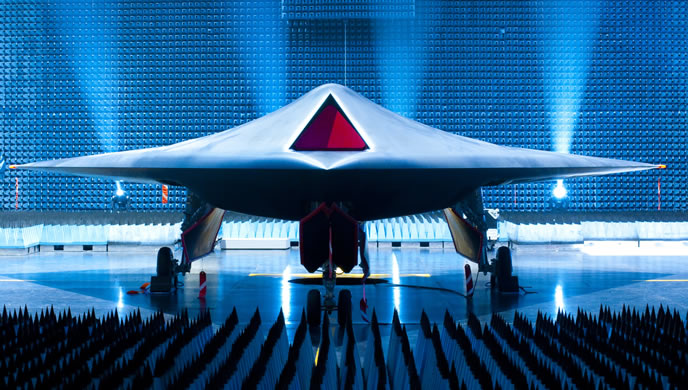 Photo above: Taranis was unveiled July 12, 2010 in a formal ceremony held at the anechoic test chamber at Warton. Photo: MOD

The British Ministry of Defence (MOD) unveiled today the Taranis prototype, an Unmanned Combat Air Vehicle (UCAV) at Warton, in Lancashire, U.K. Taranis, the concept demonstrator named after the Celtic god of thunder, will take to the air next year (2011), testing autonomous, stealthy UCAV technologies. These capabilities could be utilized in the development of future autonomous, uninhibited strike platforms capable of precisely striking targets at long range, even in another continent. The program is lead by MOD, and supported by a British industry team including the platform developer BAE Systems, engine manufacturer Rolls Royce, avionics systems provider GE Aviation and software application developer QinetiQ.

“Taranis has been three and a half years in the making and is the product of more than a million man-hours. It represents a significant step forward in this country’s fast-jet capability” said Nigel Whitehead, Group managing director of BAE Systems’ Programmes & Support business, “This technology is key to sustaining a strong industrial base and to maintain the UK’s leading position as a centre for engineering excellence and innovation.”

About the size of a BAE Systems Hawk, the 8 ton autonomous stealth plane will be shipped to BAE Systems test facility at Woomera, Australia where it will be undergoing ground testing, preparing for flight trials in 2011.

Taranis has a gross takeoff weight of eight tons. It is powered by the R&R Adour 951, developing 8480 lbs of thrust, Taranis is capable of flying intercontinental flights on long range strike missions.