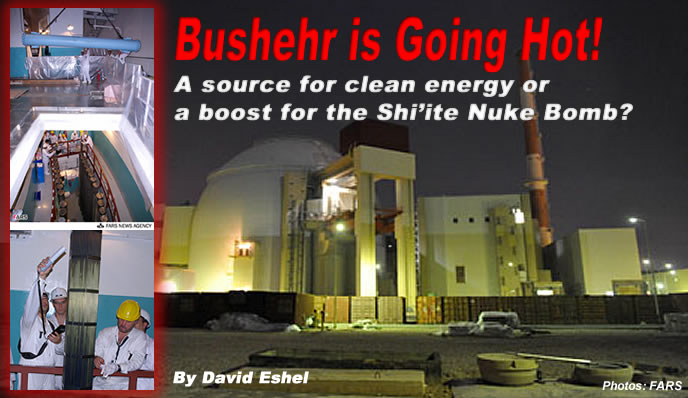 With the fueling of the Bushehr nuclear reactor initiated this weekend, the Shi’ite Mullahs mark the culmination of their nation’s long ambition to acquire access to atomic energy. Whether this should remain a peaceful overture to similar reactors to follow suit, or the mark the omen for a more sinister nuclear weapons construction effort- will remain to be seen.

Although the 1,000 Mw plant will be the first operational nuclear power station in the Middle East, its very composition does not pose serious proliferation risks. Being constructed from a light water reactor, fueled with low enriched uranium, at first sight it seems, that it should not fit into the known weapons grade plutonium production process. However, nuclear experts warn, that closer examination reveals that the nuclear facility could present considerable fall-out risk to neighboring countries, across the Persian Gulf, such as Kuwait, Saudi Arabia, UAE, Oman etc.

Moreover, these experts mention another avenue, which could become extremely dangerous. Due to the isotopic composition, weapons designers do not consider the present plutonium bred in the spent fuel of the Bushehr Plant – provided it is recharged on average, every eighteen months – suitable material for nuclear weapon grade material. However, were fuel unloaded eight months, or so into its cycle, the plutonium could become weapons grade.

Presumably, IAEA safeguards would detect such an Iranian effort and Russia has also demanded additional guarantees requiring spent fuel repatriation as a quid pro quo for new fuel elements. But were the Mullahs to balk, they could bank on fuel supplies from their own enrichment and fuel assembly facilities to keep Bushehr in operation while extracting the plutonium for weapons from the spent fuel. It might be a tricky affair, but the Iranians are known to use very clever ways to achieve their will and their country is large enough to hide important matters from preying eyes, like the IAEA watchdogs.

All these facts only serve to complicate the region’s already complex nuclear situation.
Indeed, the Gulf states are already extremely worried about Iran going nuclear but at the same time also fretting about a dangerous confrontation, that could arise from more sanctions and military threats to Tehran, which would involve them, now that radiological fall-out is becoming a high risk situation.

What concerns America and the Israelis, more than fueling Bushehr, is Iran’s refusal to halt uranium enrichment, a process that can be used to make fuel for nuclear arms. Tehran already has one potential weapons stream through its enrichment program and another pending, being the heavy water Arak reactor that is ideal for weapons-grade plutonium production.

President Barack Obama’s top adviser on nuclear issues, Gary Samore, told The New York Times that he thinks it would take Iran “roughly a year” to turn low-enriched uranium into weapons-grade material. “We think that they have roughly a year “dash time,” Gary Samore was quoted as saying. By “dash time,” the official referred to the shortest time Iran would take to build a nuclear weapon, judging from its existing facilities and capacity to convert stocks of low-enriched uranium into weapons-grade material, a process known as “breakout”.

American and Israeli officials believe that Iran has only enough nuclear materials for two weapons. And to build those two would require the country to kick out international inspectors, which would make it clear what its intentions were. It would also take some time for Iran to convert its nuclear facilities to produce weapons-grade uranium. So far, Iran has added relatively few centrifuges this year, and only about half of those are fully working, according to the International Atomic Energy Agency. But Israeli officials remain suspicious that Iran has a secret enrichment site stashed away somewhere, not yet detected by satellite observation.

Moreover, Iran’s Bushehr Reactor poses another deadly risk. Once the plant commences full operations in months to come, it will accumulate large inventories of highly radioactive waste as the fuel rods expend their energy. Although presenting a different design, the Ukrainian Chernobyl disaster demonstrated what would happen were a large reactor to release its contents. A successful military strike or terrorist attack on Bushehr could replicate the disastrous Ukraine accident-the immediate hostages to such a pending disaster threat, will obviously be the Gulf States.

But the Gulf states nevertheless are not burying their heads in the sand. The Saudis, the UAE and others are hastily building up their naval capacity and missile defense systems – with Washington’s willing help – to steel themselves against Iran’s new military buildup. Once Iran goes nuclear so will, soner than later be, Saudi Arabia, UAE, Jordan, Egypt and a host of other countries. In fact, the UAE has already embarked with the South Koreans, building four electricity producing nuclear reactors. This will lead to an even more unstable Middle East, one that goes from a sizzling conventional arms-filled powder keg to an A-bomb, defense analysts warn. Everyone fears such an arms race in an area that is not known to practice détente, but might also use a “doomsday” weapon when ready.

Moreover, Iran being a cultural threat with far-reaching strategic ambitions in the region, constantly threatens the Saudi royal’s century-long religious domination. Sunni Muslims have controlled most Islamic areas of the world for centuries. They control most of the wealth and the governments in Islam today. Shiite Muslims have been the underclass in Islam, but the revolution, is rising with the support of the Shia clerics, ruling Iran and Shiite teachings about a mystical end time savior figure, called the “Mahdi”. Iran and this rising revolutionary movement is now the great fear of the ruling Sunni families in the gulf and it is why these nations are now arming to the teeth. As the Tehran Mullah’s are rapidly gaining ground and the United States, under the controversial leadership of President Barak Hussein Obama, is losing is as fast, the conditions among Islamic nations might now ripen for a great cultural conflict (with nuclear weapons?), between Sunni and Shiite Muslims.

The focus of the West today is on Iran and Israel, but Iran is just using Israel as a forefront excuse to develop the weapons that will be necessary to achieve regional domination. The Suni-led Arab oil rich nations spend huge amounts of money acquiring the latest weapons and unlike the past, it is not Israel that these weapons are pointed at. Tehran Mullas do not fear Israel. They fear their own Arab brothers and neighbors.

Enriched Uranium rods are inspected and entered into the reactor at Bushehr. Photos: FARS NEws Agency.