ISDEF 2010 exhibition opened in Tel Aviv Conventions Center today provided an impressive hub for new and innovative defense and security technologies from different countries some are making their first appearance out of their countries.

On our first impressions report Defense Update we are focusing on several new systems including new weapons and accessories, casualty evacuation, and sensors.

Two companies are demonstrating Ultra-Wide Band (UWB) radar systems providing through the wall sensing. Israel-based Camero is showing the Xaver 800 and 400 products and is unveiling a prototype design of the miniature hand-held Xaver 100, that fits into a soldier’s pouch.

Medical treatment and casualty evacuation were also among today’s highlights at ISDEF. Easy Rescue unveiled their latest innovation in casualty rescue and evacuation, introducing the BUDDY – a new method to transfer wounded persons from areas under engagement or where movement or access are challenged by terrain, design (narrow paths), man made or natural obstacles. An operational study of such system conducted by the IDF Home Front Command indicated that such system can contribute to personnel saving by a factor of 5 – 10, compared to evacuation techniques employing only stretchers and gurneys.

In the field of robotics, the Spanish company TechnoRobot has introduced here the RiotBot – a new class of unmanned platform designed for intervention in riots, prison disturbances, or other civil disorders, where neutralization of specific elements is required by law enforcement agents, avoiding direct contact with the crowd. By operating with effective non lethal means to suppress, or deactivate a target without the presence of personnel, RiotBot can eliminate potential threats while minimizing escalation typically caused by police intervention.

Israel’s Mifram company has unveiled at ISDEF 2010 the new ‘Shark’ – a protected observation cabin that can be turned into an elevated firing post for snipers or security guards. 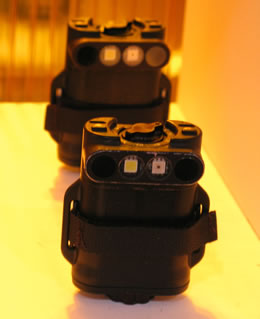 The O’gara Group presented here a advanced collection of electro-optical devices tailored for use by the warfighter. Among the latest systems introduced by the group are the Conformal Enhanced Heads Up Display (CEHUD), and Multi-Spectral Combat Identification Beacon called NOVA. A different concept providing the warfighter with timely command and control while feeding their commanders with situational understanding was displayed by emenu. Their Integrated Rifle Information Sensor System (IRISS) system, is mounted on a piccatinny rail on top of the rifle, providing ‘heads up display’ enabling the warfighter and commanders to seamlessly share sight images, situational awareness, position and target information.