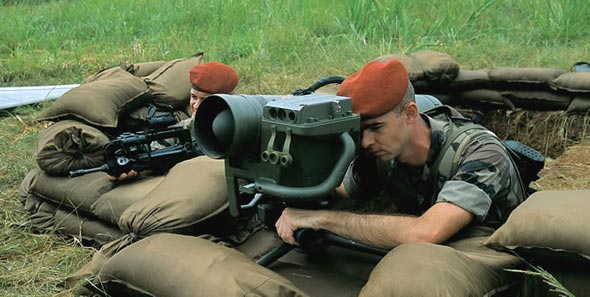 Above: Eryx was designed for operation by a single soldier. Photo: MBDA by Yves Debay

ERYX is a short-range anti-tank weapon developed by MBDA to address specific French Army requirements for a highly portable lightweight, single operator anti-tank weapon that could be used by special forces, paratroops and rapid deployment forces. ERYX employs wire guidance, making it useful against stationary or mobile targets at ranges between 50m to 600m. As an infantry weapon ERYX is more versatile than the Milan, as it can be fired from the shoulder or with a tripod. Yet the weapon is relatively heavy, weighing 17.5 kg including the missile, and firing post (sight). A key advantage provided by the weapon is the ‘soft-launch’ characteristics, enabling firing from confined spaces in urban combat.

The weapon was recently enhanced with the integration of a new uncooled thermal sight providing augmented range for detection, reconnaissance and identification, at ranges which significantly exceed the combat range of the missile itself. The enhanced version has already obtained its first customer – an unnamed Middle Eastern army was scheduled to get the new system in 2010. According to MBDA more than 57,000 ERYX missiles have been ordered by eight countries including the French Armed Forces.