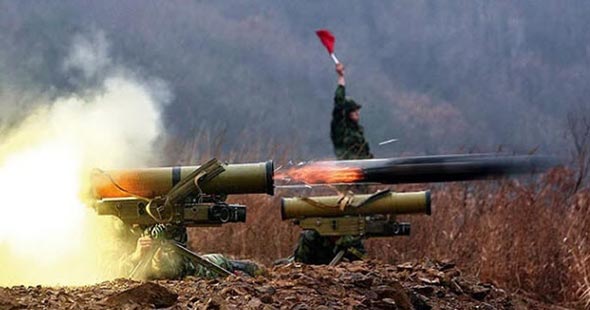 The Russian 9K115-2 Metis M1 (NATO reporting name AT-13 Saxhorn-2) was designed to augment Russian motorized infantry companies offering improved anti-tank capability at combat effective ranges of up to two kilometers. (This is the maximum effective range of the latest version – Metis M1 has an effective range of 1,500 m’).

The wire-guided missile uses semi-automatic command-to-line-of sight (SACLOS) guidance system – an effective, yet somewhat outdated method, by current western standards. Metis M (AT-7) introduced in 1992 has a tandem shaped charge warhead that can defeat reactive armor and penetrate steel armor up to 950mm deep. It is also effective against light armored vehicles or fortifications. KBP is also offering the missile with a thermobaric warhead. The missile is in operational service since 1992. Metis M is currently in service with the Russian infantry, as well as former CIS states Ukraine, and Georgia. Other armies operating the missiles include Hungary, Croatia, Malaysia, Iran, Syria, Morocco and South Korea. The M1 version offers a lighter firing unit, through the use of lighter materials and modern thermal imager. Other improvements include better armor penetration capability.

The Metis M1 ATGW element is operating in teams of three personnel. The shooter is

carrying one missiles contained in canister/launchers, command and launch unit and thermal sight – a system weighing about 30 kg. The other two crew members carry two missiles each, at a weight of 13.8 kg per missile.