The FMG-148 Javelin man portable guided missile has been widely accepted among the leading modern anti-tank weapons. To bring the weapon up-to-date with current and future requirements, particularly regarding hybrid warfare, the U.S. Army plans to field by 2014 the ‘Javelin Increment II’ weapon system – an enhanced version of the missile. These improvements will increase the weapon’s effective range, precision and introduce a ‘regret’ function to avoid fratricide or excessive collateral damage by introducing ‘Precision Terminal Guidance’ capability.

The improved missiles will also receive modernized components, such as an advanced seeker and other elements replacing components that became obsolete through the years. An improved warhead will also increase the Javelin’s hard armor penetration requirements, a new fragmenting case and fuse to increase the weapon’s lethality against soft targets and personnel in the open. The warhead and propulsion motor will employ insensitive propellant and explosives, thus reducing vulnerability to impact and fire. Other enhancements considered for future increments include advanced fusing and higher performance propulsion, employing insensitive energetic materials. To compensate for the additional weight the missile will get a new mid-body made of lightweight composites. The launch tube and motor case will be produced of ultra-durable structure made of new nano-composites.

In parallel, the Army is expected to implement new features with the weapon’s fire control system and missile seeker, as part of the ‘Close Combat Networking of Weapons and Sensors’ (CCNWS) strategy. Currently under evaluation is a ‘people tracker’ algorithm and image stabilization capabilities, embedded into an advanced ‘system on a chip’ type integrated processor architecture.

Another enhancement tested with the Javelin in 2008. The test scenario involved using a Universal Control System to cross-cue a Javelin gunner with an unmanned aircraft system (UAS). This solution provides the javelin gunner with improved situational awareness and target location. 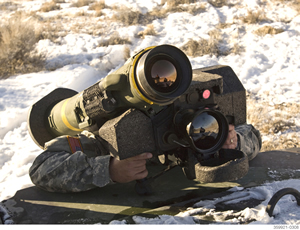 Javelin is currently in service with the U.S. Army, U.S. Marine Corps and 11 allied customers. In 2009 the Javelin Joint Venture received a $176 million contract from the United Kingdom’s Ministry of Defense for more than 1,300 Javelin missile rounds; deliveries of the missiles began in 2010 and will continue through 2012. In 2010 Saudi Arabia also selected the missile, buying 20 command systems and 150 missiles to equip its infantry and, possibly national guards. France has also placed an order for the missiles to support its forces deployed in AFghanistan, and consider increasing orders to equip all infantry regiments. India is also considering buying the missile.