The Israeli Spike missile was developed by Rafael to meet IDF requirement for an infantry operated, precision guided weapon capable of defeating enemy armor from long distance. The missile employs electro-optical guidance and is provided in a ‘fire and forget’ variant or ‘fire and forget/fire and update’ variant, equipped with fiber-optical link maintaining optional ‘man in the loop’ control throughout the engagement. Once fired at a target, the missile flies an elevated trajectory from where it can acquire and engage targets which are not visible prior to launch, engaging targets from above, where they are least protected.

Over 21,000 Spike missiles were ordered and are operational with 18 armies worldwide. Over 3,000 were fired, many in routine operational training and combat scenarios in conflict areas worldwide. The IDF fielded the missile with regular infantry battalions in 1998. Delivery of more missiles continues, with acquisitions supplying reserve battalions expected to be completed by 2012. By that year the IDF plans to introduce enhanced systems, comprising of lightweight, improved launchers and sights, integrated with position location and connectivity to battle management systems.

Planned enhancements include the integration of position location systems into the system’s command module, enabling operators to quickly orientate at the firing position and align their position and aiming sights with networked battle command systems. The system known at Rafael as ‘Tycoon’, employs a GPS unit and link to the land forces’ ‘Digital Army Network’ also known as ‘Zayad’.

The weapon has also received a new lightweight launcher that will be integrated with the new command and sight, position reporting and power supply systems will weigh 7.5 kg less than the current system. The new launcher weighs 10 kg, instead of 13kg of the current launcher. The entire system will require fewer batteries, saving additional 4.5 kg from the load carried by the Spike team. The new sight will use an improved thermal imager with four fields of view, enabling better target acquisition in day and night. The new system will also include a digital video recorder enabling instant replay for battle damage assessment, post mission debriefing and training purposes.

A derivative of the Spike is the short range ‘Mini-Spike’ variant, known in Hebrew as ‘Gilon’. This weapon was unveiled by Defense Update in September 2009. “The Mini Spike is expected to cost and weigh about a third of the Spike, while having an effective range of 1,500 m’. The new missile will also introduce new flight modes, designed to enable precision strikes in urban areas – such as flying through an open windows or attacking an enemy target hidden behind defilade or obstacles using ‘non line of sight’ engagement. The Mini Spike will be much lighter – weighing about four kg, compared to 13 kg of the Spike LR. To minimize the load on the infantry, Mini Spike will use the same launcher and sight system used for current Spike LR, loading the missile on a special adaptor.

A different member of the Spike family currently in early development is the Spike Short Range (Spike SR) – a shoulder-fired, ‘fire-and-forget’ direct-attack precision guided weapon designed for precision engagement at ranges of 25 – 1,000 meter. The weapon will weigh about 7 kg, and utilize a low-cost thermal camera and guidance electronics, strapped to the missile’s nose (eliminating the mechanical gimbal). Spike SR will be carried in a disposable container-launcher. The system will not require a separate sight – as the missile’s ‘eye’ will provide this function through a low-cost display integrated into the launcher, showing the target until the missile is launched. The weapon will carry relatively large multipurpose warhead, comparable in size and effect to Rafael’s ‘Matador’ – extending the unguided weapon’s effect beyond 1,000 m.

Another Spike innovation presented for the first time at the Eurosatory exhibition in Paris this year is the unit level simulator developed for the system. The new simulator trains entire guided missile units, instead of single teams, enabling commanders, and team leaders to practice complex tasks of situational awareness, target allocation and coordination with supported units, in addition to common technical operator skills. 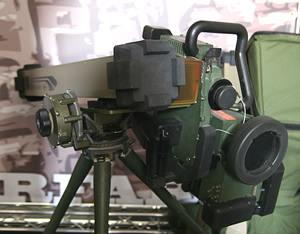