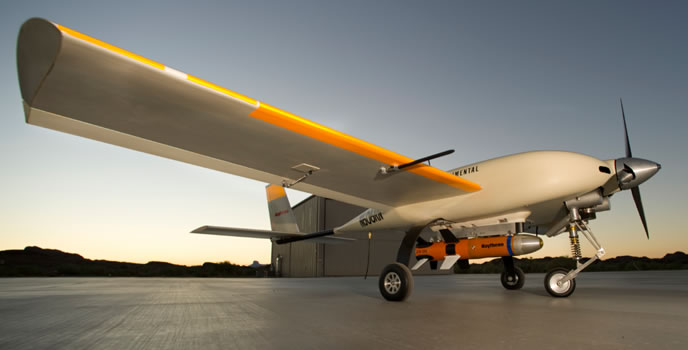 Above: Miniature missiles developed for use with small UAVs such as this Raytheon Small Tactical Missile (STM) shown above, under a Cobra experimental UAV are providing warfighters the means to execute precision attacks with minimal risk of collateral dagmage. For special missions, even these small missiles are too big, and then, the whole micro UAV becomes the weapon itself. Photo: Raytheon

The use of UAVs as combat weapons is growing rapidly in recent conflicts, highlighted by operations in the Middle East and Central Asia. The commonly used platforms are Predator and Reapors – MQ-9, MQ-1A and MQ-1C, equipped for long endurance, and capable of persistent endurance of several hours over the battlefield. Yet, for many applications, users require smaller, covert weapon systems to create localized, yet highly accurate and effective kinetic effect. For these applications, the UAV platform becomes the weapon, in the form of miniature ‘suicide’ Mini-UAVs. Several programs pursuing such capabilities are currently underway addressing the growing interest in this weapon caregory, among special forces and the military.

Paving the way for Weaponized Micro-Drones

DARPA has recently concluded a study called Close Combat Lethal Recon (CCLR), developing enabling technologies for a remotely operated airborne sensor, that could be converted in the field into a precision guided weapon. Such a weapon will provide the warfighter the ability to engage hidden targets in non-line-of-sight (NLOS) conditions, in complex (urban) environments. DRAPA called it ‘hand-launched loitering cruise munition’.

The idea was to field a guided weapon, controlled intuitively from wearable interface (like smartphone app). Linking between the air vehicle and control unit would be done by fiber-optical links, providing high-bandwidth communications for ultra-high resolution imaging. Such a weapon could fly effectively to seek targets over and around buildings, onto rooftops, and into open building portals.

DARPA identified the major challenges for the program as the development of man – portable airframe that can achieve the required terminal accuracy, and by carrying sufficient warhead to defeat the target set. The development of a lightweight and compact portable launcher is to be used with the soldier’s standard equipment. Development of simple, yet effective human interface utilizing PDA-sized map-based graphical user interface, displaying streaming video throughout the mission, from planning to execution presents another challenge.

US Air Force Embarks on LMAMS Program for SOCOM

LMAMS will employ a tube-launch or hand-tossed expendable weapon, electro-optically guided system, fitted with a small warhead. The weapon will be able to loiter quietly over the target for limited time, waiting for optimal conditions to attack, while maintaining constant communications with the operator, transferring live video of the target below. Once attack permission is granted by the user, the drone’s mission-control becomes a guidance system, employing automatic-target tracking to lock on target, descending through a fast, controlled diving guiding itself to hit the target with the highest precision.

In November 2010 several companies have submitted inert ‘suicide MAV’ to demonstrate mature technologies. Although none was specifically attributed to CCLR program it is believed that at least some of the elements, including the electro-optical sensor and its operating algorithms provided by the government were derived from the program. Following these tests three contractors were selected to continue and provide weaponized systems for a test series, planned for April 2011 – Aerovironment, IAT and Textron Defense Systems. The Air Force plans to begin procurement of such weapons as early as 2012. Two representative systems in this category are a new ‘Point and Toss’ mini-drone from IAT and the Switchblade developed by Aerovironment, presumably under ‘Project Anubis’.