India is integrating several versions of airborne early warning and control (AEW&C) systems, integrated on board Russian and Brazilian aircraft, providing the Indian Air Force (IAF) a capability to detect targets and manage air operations beyond the range of conventional ground-based radars and tethered radars currently used by the Air Force.

Under a parallel program the Indian Air Force has inducted two IL-76TD AEW since 2009 with the third being completed at IAI in Israel. These aircraft are integrated with the IAI/Elta EL/M-2075 radar and complimentary ESM system.

India and Israel are reportedly discussing the delivery of three additional IL-76TD based AEW planes. The IL-76 AEW is designed for mission extending over 9 hours, IAI is also eying Indian prospects for smaller, more affordable AEW platforms that could sustain five-seven hour missions, keeping operating costs at the minimum without compromising AEW capabilities. IAI also offered the Gulfstream G5 based EL/M-2085 Conformal AEW (CAEW) which can remain on a mission for 11 hours, but deemed too costly for the Indian requirement. 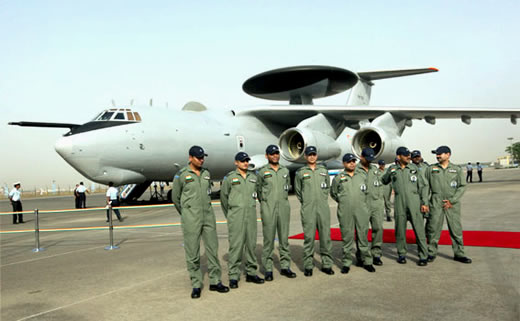 Next month Embraer is planning to roll out the first of three Airborne Early Warning and Control (AEW&C) aircraft, modified to equip the Indian airborne early warning radar system developed by the Indian Centre for Airborne Systems (CABS). Built around a modified version of the Brasilian EMB-145 from Embraer, the new system was integrated by the Indian company addressing IAF’s specifications. Flight trials are expected to begin by the end of 2011. CABS is a laboratory under the Defence Research and Development Organisation (DRDO). Embraer and DRDO embarked on this cooperation in 2008, for the modification of the EMB145, preparing the passenger plane to carry the dorsal active array antenna. Flight testing of the modified aircraft will be performed in Brazil, to follow by the delivery of the aircraft to India around August 2011.