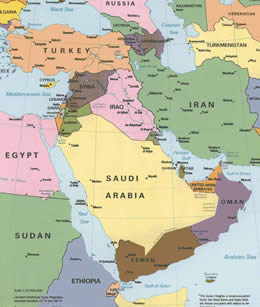 The Middle East defense spending binge is set to grow further in coming years as Gulf Arab nations embark on military modernization programs. The region’s biggest defense spenders are Saudi Arabia and the United Arab Emirates. In its annual Middle East market analysis, Business Intelligence & research ‘Forecast International’ expects defense investment across the region to expand by 14 percent over the next five years.

Medium-term regional defense growth will stem from Saudi-Arabia, the UAE – both core members of the Gulf Cooperation Council (GCC) members, as well as Iraq. Faced with internal security challenges, plus the need to solidify its borders, Baghdad will invest an average of $12.5 billion annually through 2015 towards the advancing development of the Iraqi Security Forces (ISF). Iraq’s military procurements are based almost exclusively on U.S. systems, acquired through the U.S. Pentagon’s government-to-government Foreign Military Sales (FMS), ensuring U.S. defense companies are the beneficiaries. Since 2005 the U.S. Department of Defense has allocated about $19.1 billion to the fund.


The principle area of Iraqi investment going forward will be in bolstering the Iraqi Air Force (IQAF). The IQAF plans to field 500 fixed- and rotary-wing aircraft by 2020; its pressing needs include advanced jet trainers and combat aircraft.

The withdrawal of U.S. forces from Iraq, combined with a broad range of equipment requirements means that the pace of fitting-out the ISF will have to accelerate if the central government is to capably provide security. Such progress may be hindered if Pentagon investment in the Iraqi Security Forces Fund dries up due to Washington’s own budgetary pressures at home.

“Although the Iraqi government would like to diversify its supply chain, the U.S. remains its principal provider of military equipment,” says Forecast Middle East defense analyst Dan Darling. “So long as U.S. funding towards the development of the new Iraqi Security Forces continues, this is unlikely to change. Should Washington turn off the tap, others will surely step into the void, including France, Russia and suppliers from Eastern Europe.”

While Iraq provides a robust market opportunity due to the ongoing ISF rebuilding process, the scale of investment in the Gulf region is higher. Spearheaded by a $60 billion package of approved FMS agreements, Saudi Arabia aims to upgrade its air fleet with new and refurbished F-15 jet fighters and new helicopters including up to 70 Boeing AH-64D Apaches, 36 Boeing AH-6i Little Birds and 72 Sikorsky UH-60M BlackHawks. In addition there is mention of a major Royal Saudi Navy upgrade program also being pursued through Pentagon FMS channels that could be worth up to $30 billion.

Mirroring the Saudi efforts, the UAE is also undertaking a modernization of its Air Force. This modernization includes an approved FMS agreement for the purchase of 60 AH-64D Apache helicopters. The UAE is also in the process of considering successors for its fleet of Mirage 2000 jet fighters in what may ultimately prove to be a 60-unit buy worth up to $10 billion. Additional areas that the UAE may seek to upgrade include littoral protection and air defense.

Concrete defense cooperation amongst the six GCC members continues to be elusive, leaving each nation to pursue their needs independently. Thus the UAE, Kuwait and possibly Qatar are each contemplating a buy of the Dassault Rafale combat aircraft while the Saudis and Oman seek U.S.-built solutions to their jet fighter needs. But despite the lack of progress within the GCC in terms of a common procurement approach, the one constant is that at the national level defense investment remains robust, generally representing between 10-20 percent of total state expenditure annually. For 2010 combined GCC defense/security investment was $68.3 billion. Forecast International expects that total to increase to $73.4 billion in 2011 and continue growing to $82.5 billion by 2015.

“Fearing Iran’s regional strength the GCC states continue to seek a distinct qualitative military-technological edge over Tehran,” Darling says. “But Iran’s manpower and missile strengths camouflage some serious weaknesses, such as command-and-control shortcomings, a combat aircraft fleet falling into disrepair and an armored vehicle inventory of questionable capability. Other than its long-range missiles, Iran is limited for now in its ability to project conventional military power across the Gulf. In other words, some GCC countries may be susceptible to over-buying for a certain kind of threat that is not readily apparent.”

Though it may lack the modern material seen in most Tier 1 militaries, this is not indicative of reluctance by Iran to improve and expand its weaponry or invest in defense. Tehran spends around $9.3-9.5 billion annually, a trend Forecast expects to continue in the near-term. This level of expenditure places it amongst the five highest defense spenders in the region, behind Saudi Arabia, Israel, Iraq and the UAE. Much of Iran’s defense investment goes towards personnel costs, missile programs, upgrading existing platforms and developing indigenous hardware.

Because of the myriad threats it faces, Israel continues to place a premium on military funding. Aided by U.S. Foreign Military Financing (FMF) of $3 billion, the country continues to invest in modern jet fighters, its multi-layered anti-missile air-defense network, unmanned aerial vehicles, the Namer heavy infantry fighting vehicle and a slew of other projects. Impending purchases include a new advanced jet trainer and two large missile corvettes. Egypt is also a beneficiary of generous U.S. FMF allotments, receiving about $1.3 billion per year. Forecast expects Egyptian defense spending defense over the next five years to reach around $16 billion, with Israeli spending coming to over $64 billion during that same timeframe.

“The major defense markets of the Middle East continue to be dominated by the U.S.,” Darling says. “Russia has footholds in Syria and Yemen and is making efforts to help equip the Lebanese Armed Forces. But its regional market share pales in comparison to that of the U.S. With President Medvedev signing a decree back in September banning the supply of a variety of Russian armaments to Iran, the other major market for which Moscow was the principal supplier is now likely to be ceded to China.”