Eurofighter and engine supplier Eurojet are promoting a thrust-vector option for the Eurojet EJ200 engines powering the Typhoon, proposed for the Indian MMRCA program. Eurofighter has raised the possibility of a thrust-vectoring upgrade to become part of a future Typhoon mid-life upgrade, a move that could deliver substantial operational cost savings that would offset the cost involved with the engine modification. Early at the Eurofighter program addind TVN was originally considered part of the Tranch 3 upgrades but this plan did not materialize.

According to Eurojet, a Typhoon equipped with thrust vectoring nozzles (TVN) could reduce fuel burn on a typical mission by up to 5%, while increasing available thrust in supersonic cruise by up to 7%. Typhoon is already capable of performing ‘super-cruise’ (flying supersonically without afterburner) and the proposed modification will further increase this capability. Other cost saving aspects of thrust vectoring include the potential to extend engine life by reducing operating temperatures at a given power setting. It could also be used to reduce take-off and landing distances and approach speed. Beside the operational cost savings, TVN enhances the aircraft maneuvering as it becomes a ‘virtual control surface’ when coupled with the aircraft flight-control system. Another aspect is improving the aircraft ability to carry an asymmetric weapons load.

Eurofighter is considering to fund a flight demonstration of TVN equipped Typhoon to test these capabilities. According to Eurojet, TVN could be retofitted to the existing EJ200 without the need for structural changes to the engine or airframe. 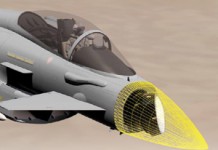 European Air Forces to get AESA radars for their Typhoons