On March 3, 2011 the U.S. Air Force accepted MQ-1 Predator tail number 268, the last manufactured for the service. Col. James Beissner, Air Combat Command’s Chief Irregular Warfare Division, accepted the aircraft on behalf of the Air Force. Since its first flight in July of 1994, 284 aircraft of the RQ/MQ-1 series have been produced, of which 269 were transferred to the U.S. Air Force (including three that also operated by the U.S. Navy). The 284 aircraft accumulated over 900,000 flight hours and maintained a fleet fully mission capable rate over 90 percent, making it one of the Warfighters most valuable assets, according to Colonel Coombs.

“The hand-off of the last MQ-1 Predator to our U.S. Air Force customer commemorates not only what has been accomplished, but what we are still looking forward to achieve,” said Frank W. Pace, president, Aircraft Systems Group, General Atomics Aeronautical Systems, Inc. “17 years, 268 aircraft, and 920,000 flight hours later, our signature Predator A UAS line will continue to change the way we fight wars for many more years to come.”

General Atomics continues to produce the MQ-1B Predator (Reaper) is a Medium-Altitude, Long-Endurance, Remotely Piloted Aircraft for the U.S. Air Force and foreign customers. Its primary missions are close Air Support, Air Interdiction, and ISR. It acts as a Joint Forces Air Component Commander-owned theater asset for Reconnaissance, Surveillance and target acquisition in support of the Joint Forces Commander. The company also produces the MQ-1C Grey Eagle for the U.S. Army, and has recently introduced the Predator XP for export customers. The company is also working on two advanced, stealthy versions – the MQ-9C Predator C (Avenger) for the U.S. Air Force and a carrier-based derivative for the U.S. Navy. 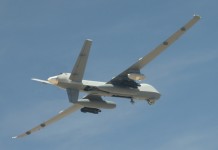