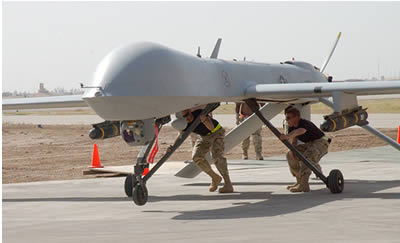 The Predator Unmanned Aerial System (UAS) designated RQ-1, was launched in January 1994 as an Advanced Concept Technology Demonstration (ACTD). The armed version that followed the RQ-1 was designated MQ-1. The design was based on a modified Gnat 750 UAV built by General Atomics Aeronautical Systems. (The Gnat does not have the Ku Band satellite link). The US Air Force received its first Predators in 1994, and deployed them for the first time over Bosnia between 1995-6. Since then, Predators were operated by both USAF and the Central Intelligence Agency, designated RQ-1A.

Following successful integration of Hellfire missiles, an armed version of Predator was deployed in Afghanistan during Operation Enduring Freedom (OEF) in 2002. These aircraft are designated MQ-1. Officially, the Predator A system was declared “operational” only in 2004, ten years after it began flying with the US Military. Predator UAVs are currently operated by the US Air Force and Italian Air Force. By September 2007 the Predator fleet accumulated a total of 300,000 flight hours, over 80 percent in combat missions and this pace is increasing. In October 2007 alone, the Predator fleet performed 12,000 hours. More recently the USAF fielded the Reaper, a larger more capable UAS based on an outgrowth of the Predator platform.

The production version of the Predator aircraft is equipped with a turbo-charged Rotax 914 engine producing 105 horsepower. The aircraft measures 27 feet (8 m’) long, 6.9 feet high. The Predator weighs 1,130 pounds (512 kg) empty, and 2,300 (1,043 kg) pounds Maximum Take Off Weight (MTOW). On a typical mission the Predator cruises at an altitude of up to 25,000 feet and 70 – 84 mph, with maximum speed of 135 mph. The Predator can maintain a 40 hours patrol over a large area, at a distance of 400 miles from its operating base. The payload capacity is 450 pounds (204kg) internal plus 300 lbs (136 kg) in external stores, and fuel capacity 665 pounds (100gal./286 kg). Enhancements for Predator include replacing the original electro-optical/infrared sensor ball with an improved system that adds a laser designator/rangefinder and adding wing hard-points and wiring to carry and launch two Hellfire missiles. These improvements evolve Predator to into an armed reconnaissance platform which retains all the capability of a traditional ISR asset, and adds a direct strike capability. 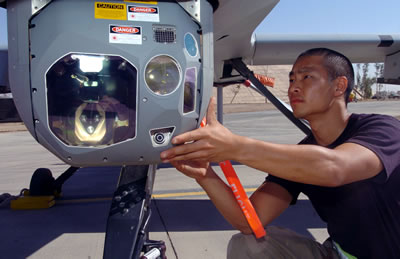 As a multi-sensor platform, Predator is equipped with an EO/IR and SAR payloads. The for day/night imagery, the system uses the Raytheon AN/AAS-52 Multisensor Tactical System (MTS) electro-optical stabilized turret, offering day and night operation. When weather conditions limit its operations, for coverage of a large area,Northrop Grumman’s TESAR Synthetic Aperture Radar is used. The UAV uses line of sight communications datalink or satellite communications, to receive flight instructions and transmit video streams, still images and other sensor information to the mission control center. Information gathered by a Predator can be shared instantaneously with commanders around the world via Rover remote receiving terminals. Imagery products are distributed worldwide via defense communications satellites or commercial services, utilizing the Trojan Spirit II intelligence distribution satellite terminals and DCGS intelligence support network. 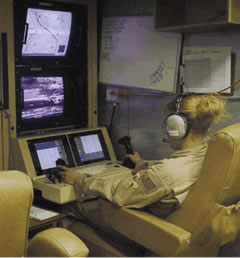 During operations in Iraq the Air Force used both in- and out-of-theater ground control stations, with beyond-line-of-sight air vehicle control, to fly Predator. This gave the Combined Forces Air Component Commander great flexibility since he could increase capability and have redundant control using up to five ground control stations at multiple locations. Three orbits were controlled, via remote operations, from the United States. Four simultaneous Predator orbits were flown over Iraq, and an additional orbit operated over Afghanistan. Combining the reach back operation in support of combat operations in-theater, used for both Global Hawk and Predator significantly reduced troop deployment and improved system availability, reduced theater force protection needs, and saved significant operating costs. Moving data rather than people was a demonstration of “networked” operations and another example of the rapidly evolving use of UAVs. This enhanced capability shortens the kill chain and dramatically reduces the opportunity for targets to flee if tactical aircraft are unavailable to deliver weapons.

The USAF preferred to operate the Predator with “pilot in the loop”. During operation in Iraq and Afghanistan, Predators are flown by USAF pilots located in Nellis AFB California. The aircraft and mission payloads are controlled via satellite data link. Sensor feeds are received in the mission control center back in USA via satellite where they are processed and analyzed. The imagery and intelligence products are distributed on the global intelligence network (DCGS) and are accessible to USAF and other forces worldwide. Raw images can also be used, as they are received directly by units in theater, using video links. The air vehicle is equipped with UHF and VHF radio relay links, a C-band line-of-sight data link which has a range of 150 nautical miles and UHF and Ku-band satellite data links.

The UAV Ground Control Station is built into a single 30ft. trailer, containing pilot and payload operator consoles, three Boeing Data Exploitation and Mission Planning Consoles and two synthetic aperture radar workstations On board communications equipment include satellite and line-of-sight) ground data terminals. The Ground Control Station can send imagery data via a land line to the operational users or to the Trojan Spirit data distribution system. The Trojan Spirit II data distribution system is equipped with a 5.5m dish for Ku-band Ground Data Terminal and a 2.4m dish for data dissemination.

In February 2009 the U.S. Air Force (USAF) MQ-1 Predator unmanned aircraft fleet have surpassed the 500,000 flight hour milestone, 87 percent of those hours were flown in combat.  “In July 1994 we delivered the first MQ-1 Predator, and next month we are scheduled to deliver the 200th Predator aircraft to our U.S. Air Force customer,” said Thomas J. Cassidy, Jr., president, Aircraft Systems Group, General Atomics Aeronautical Systems, Inc.  “In less than two years, flight hours for all Predator A type aircraft have almost doubled and are now approaching 20,000 hours per month, with USAF MQ-1s flying nearly 85 percent of those hours.  The 500,000 hour milestone was achieved by USAF Predator P-143 on February 16 while it performed an armed reconnaissance mission in support of Operation Iraqi Freedom (OIF).  This particular aircraft has flown over 330 combat missions in the two-and-a-half years it has been deployed.

August 2006: The fleet of MQ-1 Predator unmanned aerial systems achieved a milestone of 200,000 flight hours in July 2006. According to the manufacturer, General Atomics, more than three-quarters of that time spent in combat for a total of 10,961 combat missions. According to Thomas J. Cassidy, Jr., president, Aircraft Systems Group, General Atomics Aeronautical Systems, Inc. “the Predator aircraft have flown nearly 100,000 flight hours over the past two years and are currently flying more than 6,000 flight hours per month while maintaining the highest operational readiness rates in U.S. Air Force inventory.”

May 2007: The US Air Force received five Predator Mission Aircrew Training System (PMATS). By June 2007 seven PMATS systems will be based at the Creech Air Force Base in Indian Springs, NV to support the newly established 432nd unmanned systems wing, the first US Air Force wing totally dedicated to Predator and Reaper operations.

June 2007: An armed MQ-1 Predator on display at the Paris Air Show

July 2007: The US Air Force is planning to accelerate the fielding of Combat Air Patrols (CAP) maintained by MQ-1 armed Predator Unmanned Aerial Vehicles, from 12 orbits currently operating in Iraq and Southwest Asia to 21 Predator combat air patrols by December 2009.

August 2008: The US Air Force lost two Predator Unmanned Aerial Vehicles (UAVs) in the past two nights, when operating from Balad airbase in central Iraq.

Predator UAVs are currently fielded with the USAF, US Air National Guard and Italian Air Force. 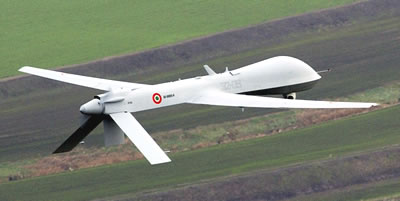