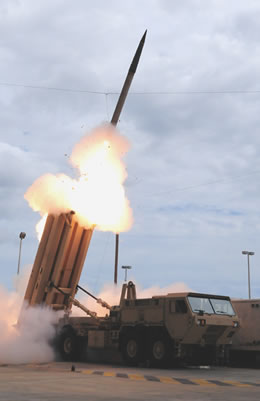 The Pentagon’s Missile Defense Agency (MDA) Lockheed Martin (NYSE: LMT) has received a production contract totaling $789.8 million For launch units and interceptors destined for Terminal High Altitude Area Defense (THAAD) Batteries 3 and 4 for the U.S. Army. The two units are expected to be fully equipped in 2013.

The contract covers the production of 48 THAAD interceptors, six THAAD launchers, four fire control units and additional support equipment for a total of $694.9 million. An option for additional launchers in the amount of $94.8 million was also included, bringing the total award to $789.8 million. Two THAAD batteries have been activated at Fort Bliss, Texas. The first (A-4 ADA Battery) was activated in May 2008 and the second (A-2 ADA Battery) activated October 2009. Unit training for this Battery began earlier this year.

The contract for the delivery of the first two U.S. Army Batteries was awarded to Lockheed Martin in late 2006. Since 2005, the THAAD development program has completed 11 flight tests, with seven intercepts in seven attempts. THAAD is the only missile defense system with the operational flexibility to intercept in both the endo- and exo-atmospheres to provide versatile capability to the warfighter.