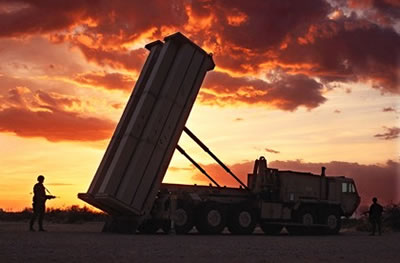 Lockheed Martin has been awarded a $619 million contract to begin production of two lead systems of the Terminal High Altitude Area Defense (THAAD) Weapon System scheduled for fielding by 2009. Once fielded, THAAD will network with other systems and sensors to provide the layered missile defense capability required for the future. The program is managed by the Missile Defense Agency (MDA).

THAAD is designed to defend U.S. troops, allied forces, population centers and critical infrastructure against short- to intermediate range ballistic missiles. THAAD comprises a fire control and communications system, interceptors, launchers and a radar. The THAAD interceptor uses hit-to-kill technology to destroy targets, and is the only weapon system that engages threat ballistic missiles at both endo- and exo-atmospheric altitudes. The contract includes funding for 48 interceptors, six launchers and two fire control and communications units.

In 2006 the THAAD weapon system transitioned from development to production, and conducted two successful flight tests. The first test demonstrated the entire weapon system, utilizing all major elements of the system and proving its capability. A second test last year resulted in the intercept of a Hera unitary target.

The THAAD interceptor uses hit-to-kill technology to destroy targets, and is the only weapon system that engages threat ballistic missiles at both endo- and exo-atmospheric altitudes. The “kill vehicle” uses an infrared (thermal) imaging seeker, built by BAE Systems, to detect and track the targeted warhead at the terminal phase, when the THAAD is homing in for a ‘Hit to Kill’ maneuver. The kill vehicle maintains maneuverability using the Divert and Attitude Control System (DACS) supplied by from Pratt & Whitney Rocketdyne (PWR). The system provided roll control of the missile during booster flyout and maneuver of the kill vehicle using small, liquid-fueled thrusters that allow the interceptor to alter direction and attitude.

Another key element in the system is the phased array radar, developed by Raytheon IDS. The THAAD radar is capable of search, threat detection, classification, discrimination and precision tracking at extremely long ranges. This radar acquires the target, discriminates the lethal object from other debris, provides track and discrimination data to the fire control which engages the target and initializes the launch sequence. Target acquisition and tracking are also performed by the interceptor’s seeker, through the terminal phase of the flight. The system communicated with the in-flight THAAD interceptor providing target updates during the flight.
PMRF is the world’s largest instrumented multi-environment range capable of supporting surface, subsurface, air, and space operations simultaneously. The THAAD program began flight testing in November 2005 at White Sands Missile Range (WSMR), NM. Three successful THAAD tests were conducted at WSMR including the intercept of a unitary target in July 2006. The first tests conducted in 2007 (January and April) were the first in a series of intercepts to be tested at the Pacific Range (PMRF) scheduled for the next 24 months leading to operational fielding in fiscal year 2009.