DCNS is a major supplier of surface vessels and submarines in the Latin America region and, specifically Brazil. Since 2008, the Brazilian Navy and DCNS embarked on a large scale program to design and construct of four Scorpene type conventional-propulsion submarines, under a technology transfer agreement in which the French designer will provide the technical assistance for the design and construction of the submarine, as well as the non-nuclear part of the first Brazilian nuclear-powered submarine. DCNS also provides support services for the construction of a new naval base and a shipyard to support these vessels.

At LAAD 2011 DCNS is displaying models of its compact submarine, designed for operation in coastal waters, a theatre of growing importance to all maritime nations. Andrasta is a direct descendant of the Scorpene already selected by Brazil. According to the designers, Andrasta combines a state-of-the-art design with stealth, agility and power.

The company highlights here the F21 heavyweight torpedo, designed to replace the French Navy’s current-generation F17 mod2 torpedo carried by its SSBN (Ship Submersible Ballistic Nuclear) ballistic missile submarine fleet and has also been selected for the next-generation Barracuda-type SSN fleet. The F21 is being developed in response to new and emerging operational challenges to offer the host submarine unrivalled dominance. Its discretion, range and fire power will give it an unrivalled tactical advantage over all adversaries. The new torpedo is designed to knock out enemy surface vessels and submarines.

As for self-protection of the submarines, DCNS highlights the Contralto-S torpedo countermeasures suite for submarines, designed to defeat latest-generation torpedoes by using acoustic decoys employing ‘confusion/dilution’ principle. Contralto-S is designed for all types of submarines and can be incorporated into new-build designs or added to existing boats as part of a refit or modernization program. The Brazilian Navy has already selected the Contralto-S for its new class of submarines, following the French Navy use of the system as part of the Nemesis program protecting its conventional attack submarines.

DCNS also highlights its expertise in integrating submarine combat systems. The principal system is SUBTICS, which combines the submarine handling, long-range navigation and weapons control, including torpedoes, anti-ship missile, counter-measures, and land-attack capability. As a fully-integrated system, all functions are operated from multi-function common consoles and its open architecture and modularity guarantee that the system can be adapted to every type of submarines and configured according to operational requirements.
Tweet
Recommended Posts 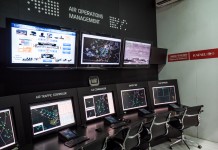