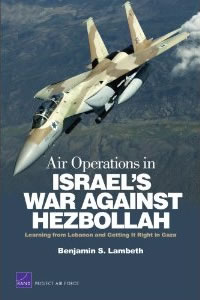 Benjamin S. Lambeth’s study of the 2nd Lebanon War and, particularly the role of the Israel Air Force, is highlighted in a new report published by the Rand Corporation Project AIR FORCE. The 388 page study covers the campaign in details, pointing to the roots of some of the flaws demonstrated by Israel’s military during the campaign. Lambeth determines that Israel’s disappointing performance in its 34 day war against Hezbollah in Lebanon in 2006 did not reflect a “failure of air power,” but rather a failure of Israel’s political and military leaders to properly assess the enemy, set achievable goals, apply an effective strategy and adequately manage public expectations.

While these facts have already been recognized by critics in Israel and abroad, Lambeth goes deeper in his analysis, assessing the validity of Israel’s leadership preference on stand-off attack in the first phase of the conflict. According to Lambeth, this strategy or any other military alternative could not meet the ambitious targets goals set by the Israeli Government at the first day of the War, when Prime Minister Olmert insisted on the unconditional return of the two kidnapped soldiers and a permanent removal of Hezbollah as a viable fighting force in southern Lebanon. These unrealistic goals further contributed to derailing further efforts in the following days, that only led to the escalation of the conflict.

“For the most part, in those mission areas in which it naturally excelled, the Israeli Air Force performed to its usual high standards of competence throughout the engagement,” Lambeth said. “The government’s greatest misstep was taking an overly unreflective view of what military power of any kind, unaided by a coherent and effective strategy, could accomplish when the declared goals were so ambitious and the Israeli Defense Forces’ ground troops were so unready. That misstep had nothing to do with the strengths or limitations of air power.”

When the conflict ended following a mutually agreed cease-fire, those unrealistic goals remained unmet, and the Israeli Defense Forces proved unable at any time to stem the daily barrage of rockets that Hezbollah fired into civilian population centers in northern Israel, according to the study.

In this study Lambeth covers in details the overall campaign, IAF air oprrations planning and execution, including stand-off attacks, ISR operations, air operation coordination, ground support and the unsuccessful ‘Katyusha Hunt’, pressing time-sensitive-target (TST) engagement to the absolute limit of what the most advanced technology of the 2000’s could offer.