Metal Storm has introduced today the ‘Fury’, a new member of the ‘FireStorm’ weapon system family. Defined by the company as a ‘High Intensity Multi-Barrel Weapon Systems’ Fury is designed as a modular scalable system, mounting up to 30 barrels. Each barrel is loaded with up to 6 rounds, delivering a maximum burst fire-rates of up to 20,000 rounds per minute with 40mm grenades.

The barrels are grouped into ‘pods’, mounted on pedestals providing elevation and traverse control. The system is typically carried on remotely operated vehicles or manned vehicles. FireStorm Fury weapons are currently configured for 40mm and 18mm calibre payloads, though other calibres up to 60mm can be accommodated if required. Metal Storm has been demonstrating its FireStorm products to military forces and is planning several more demonstrations in the second half of 2011.

FireStorm Fury was designed as a compact, high firepower weapon system that operating in either non-lethal or lethal modes. The Fury uses the modular Metal Storm weapons technology, Metal Storm can configure FireStorm Fury weapons to meet specific user requirements in terms of barrel numbers, calibres, total payload and mount control systems. According to Mr. Peter Faulkner, Metal Storm Inc. President, the business strategy behind the FireStorm family of products was to create a configurable multi-purpose weapon system that embodies the best of Metal Storm’s advanced technologies. “A single purpose weapon system can address only a small market segment“, he said. “The FireStorm Fury system is designed to readily adapt to varying needs through re-configuration, allowing Metal Storm to deliver products faster and to a broader market.”

The new system design is derived from feedback from the company’s FireStorm four barrel 40mm weapon system, and assessments of user requirements, as evolved from Metal Strom’s work with the US Marines Corps’ Mission Payload Module (MPM) Program. This feedback indicated a clear opportunity in the market for a Metal Storm weapon with a much higher payload capacity. “What we have learned is that customers really like the capabilities of FireStorm but they also want the capacity for greater forceful effects on threat targets, and more sustained firepower in an engagement before having to reload” explained Metal Storm CEO, Dr Lee Finniear. “With the increase in civil unrest around the world we expect strong demand for its non-lethal capabilities, while for combat operations its lethal firepower will be a significant force multiplier for any armed light vehicle compared to existing weapon systems”.

“A vehicle mounted FireStorm Fury will be a game changer in offensive military operations” said Faulkner, outlining some of the possible uses of the new system. As a lethal weapon firing salvos of 40mm High Explosive or Enhanced Blast grenades, the new weapon system offers a compact package fitted in addition to a primary weapon system thus multiplying the firepower available for the operator. “As a non-lethal weapon it arguably provides an even greater capability improvement,” Faulkner added, explaining the system’s non-lethal firepower could enhance military forces’ capabilities to engage threats within civilian crowds. “With FireStorm Fury loaded with non-lethal ammunition, patrols can return fire causing temporary flash blindness and temporary hearing loss. This disabling effect prevents further attack and gives time to accurately neutralize the enemy fighters, minimizing deaths or permanent injuries to the civilian population.” He explained. Other missions could employ a mix of non-lethal and lethal ammunition, providing high flexibility in dealing with escalation of force in missions such as base protection and patrols. Metal Storm has recently completed the technology development of the MPM – Non Lethal Weapons System for the US Marine Corps. 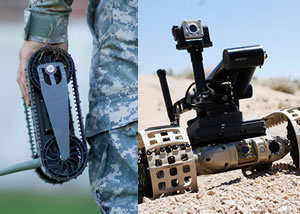 Mini-Robots for the US Army