Home Land Systems Armored vehicles The Pentagon Allocates Half a Billion US$ to Outfit Afghans with New...

The MASV family of armored vehicles comprises nine variants, configured for specific missions; the vehicles are derivatives of the M1117 Armored Security Vehicle (ASV) operated by the U.S. forces. ASV Armored Personnel Carriers (APC) are also operating with the Iraqi military and police, and the military forces of Colombia and Bulgaria.

The vehicles ordered for the ANA will be configured with Enhanced Survivability (ES) capability, which improves blast protection to mine-resistant, ambush-protected (MRAP) levels. The new ES-equipped vehicles will continue to utilize the M1117 V-shaped hull design, improved with additional protection design features that enable it to meet MRAP blast protection standards.

The vehicles will be contracted through the U.S. Army Foreign Military Sales (FMS) process and funded through the Afghan Security Forces Funds (ASFF). The contract covers the $257 million first year baseline order contract, with follow-on options for additional deliveries in subsequent years. The initial funding of $125.9 million has been authorized, funding the production of 240 vehicles to be delivered by June 2012. The contract includes options to produce up to an additional 200 vehicles, plus two option years for training and logistics support, with a potential value of $286 million. While these additional vehicles, if ordered, would have an estimated completion date of December 2012.

These vehicles will be delivered with associated support equipment, spare parts, field service representatives, training and training aids. If the options are, training and logistics support would continue through the first quarter of 2014, in time for the planned withdrawal of U.S. forces from the country. 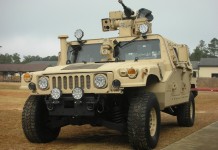