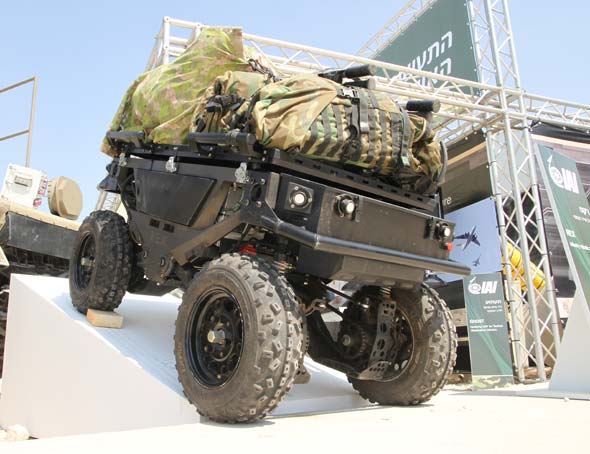 IAI is introducing a small robotic platform called REX, designed to support infantry teams in dismounted operations. The robotic platform employs a simplified, specially developed method to recognize the path of its leading soldier, following the team’s path with high accuracy using ‘virtual bread crumbs’ the leading soldier leaves behind him. REX’s dimensions and shape were determined to enable the robot efficient integration with common infantry tasks, such as entry into a building (narrow enough to move through doors) or jump from helicopters (the REX fits nicely inside a Blackhawk). Currently in final integration phases at IAI’s robotics department, part of the LAHAV division, REX has already been presented to potential customers and have raised considerable interest. Offloaded from its cargo, REX can be quickly reconfigured to evacuate a wounded soldier on a stretcher. The vehicle’s flatbed already has the attachments to secure the stretcher in place for such mission.

According to program manager Uri Paz-Meidan, the small and compact robot was designed to support dismounted infantrymen by carrying various combat loads and supplies, offloading the warfighter from excess, non-combat loads currently carried on a mission. Such load generally includes food and water for extended mission, additional ammunition and many spare batteries of various types, to last the entire mission, as well as relatively heavy mission equipment such as man portable rockets and missiles, observation systems etc. In fact, the small robot is designed to support the modern infantry system, which adds much functionality to the warfighter’s mission but also increases the load weight. To sustain long operations REX will also be configured with battery storage bay and on-board charger feeding on the vehicle’s generated power to maintain a supply of fully charged batteries, reducing man-portable and consumption of spare batteries.

REX is designed as an all terrain 4×4 vehicle powered by a piston engine. The platform weighing about 150 kg can carry 250 kg load, enough to support an infantry squad on a 72 our mission. REX carries enough fuel to move over 100 km. Part of its load can include extra fuel to further extend operational endurance.

The compact robot follows simple commands similar to those used in dog training. The operator can instruct the robot to stay or move behind the force at a certain distance, or close in. He can also transfer control to another team member at a press of a button. The vehicle uses ultrasonic sensors to move forward, keeping clearing off obstacles along its way. Its movement path is determined by electronic ‘breadcrumbs’ automatically placed by the advancing infantry along the way. Multiple sensors are used to determine the vehicle’s position relative to the supported team, both in open area, urban terrain or in GPS denied conditions. REX was designed as a simple and reliable vehicle, responding to five basic commands. The robot is instructed to keep a short or long distance from the team it supports, ordered to ‘stay’ in its place or dash forward to link with the force Alternatively, in situations where a vehicle should move on a different path, it can be driven by tele-operated by remote control unit.

IAI unveiled the REX concept two years ago in 2009, introducing a larger model, configured as a 6×6 platform. Since then the concept evolved into the 4×4 version unveiled at the Latrun Land Warfare conference in 2011. The international debut is planned next month, at the AUSA exhibition in Washington DC.