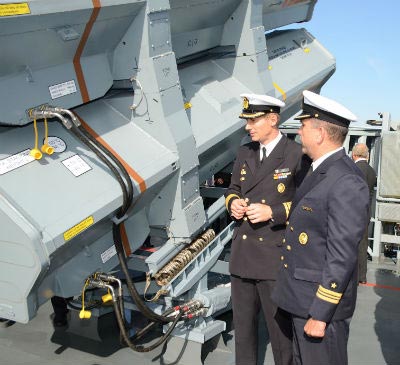 October 4, 2011: Eurocopter has successfully tested a hybrid helicopter that combines a turboshaft internal combustion engine with an electric motor. The supplemental electric system is used to enhance safety on emergency landing, by increasing maneuverability of the single-engine helicopter during an autorotation landing – which is performed by helicopters in the event of a main engine failure. Eurocopter integrated the hybrid system in a production version of the light, single-engine AS350. In the event of an engine failure, the electric motor provides power to the rotor, allowing a pilot to control the helicopter during the descent to a safe touchdown. Eurocopter considers offering this innovation with its series production helicopters.

September 27, 2011: The official roll-out of the RBS15 Mk3 Surface-to-Surface Missile for the German Navy took place at a ceremony of the Federal Office of Defence Technology and Procurement. Representatives of the Federal Ministry of Defence, the Federal Office of Technology and Procurement, the German Navy, Diehl Defence and Saab Dynamics participated in the event at the naval base Kiel on September 22, 2011.

Diehl delivers the RBS15 Mk3 anti-ship missile as the main weapon system of the German Navy´s new K130 corvette. A special feature of this German-Swedish Missile is its additional capability enabling precise engagement of land targets. The launch customers include the German Navy as well as Poland which is equipping its ORKAN class speedboats with RBS15 Mk3 missiles. The delivery of the first missiles began in March 2011.