October 23, 2011: Suspected of illegal arms export to Libya, German arms manufacturer Heckler & Koch of of Baden-Württemberg Oberndorf has been called for questioning by the prosecutor office in Stuttgart, Germany. During the recent hostilities in Libya dozens of H&K G36KV short-barrel assault rifles designed specifically for special operations were captured by Libyan rebels that entered Col. Qadaffi’s headquarters at the barracks of Bab al-Asisija in Tripoli in late August. The weapons were still in their packing carts when siezed by the rebels. The transfer of such weapons to Libya was banned by german law. German authorities are investigating weather these rifles are associated with a shipment of 608 G36K rifles and 500,000 rounds of ammunition approved for sending to the Egyptian Ministry of Defense in 2003. (Der Spiegel)

October 21, 2011: French shipbuilder DCNS has officially handed over the first Gowind Offshore Patrol Vessel (OPV) L’Adroit to the French Navy on 21 October. The ship will be under the command of Captain Loïc Guyot for a period of three years, while remaining the property of DCNS. With two French Navy crews rotating every four months, L’Adroit is expected to offer a high level of at-sea availability, spending 220 days a year on operational missions performing maritime security missions including fisheries surveillance, counter-piracy, drug interdiction, environmental protection, humanitarian aid, and search & rescue. The vessel is equipped with state of the art systems including an integral S-100 UAV, commando boat launch ramps, panoramic bridge and single enclosed mast for 360° visibility, teleconferencing facilities and long-range acoustic devices. (Defense-Update)

October 21, 2011: Bowing under economical burden the german Government plans deep cuts in defense spending, dramatically reducing planned procurement of main weapon systems and platforms. Overall the personnel level in military services will be reduced from 185,000 to 65,000, to include only professional service members. Among the procurement programs affected are Eurofighter Typhoon, NH90 and Tiger helicopters, all managed by EADS or its subsidiaries. Other programs affected are Puma armored infantry vehicles, Euro Hawk and other drones. (Defense-Update) 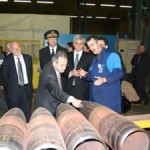 October 12, 2011: As the exclusive supplier to the French Air Force and Fleet Air Arm and several French export customers, SAMP has been a builder and prime contractor of general-purpose “dumb” bombs for more than 50 years. However, competition from the U.S. has increased since France standardized its aerial ordnance to meet NATO standards, while shifting to high precision weapons meant lower volumes of ordnance consumed. SAMP is the principal warhead supplier for Sagem, for their HAMMER (AASM) weapon which could be looking elsewhere for suppliers if the Rafale and a French origin weapon suite are selected in India or Brazil. The French military could rely on bombs imported form the U.S., while for export, cooperation with Israel’s IMI has been in discussion for years. (Defense-Update)

Libya: US Air Strike Probably Prevented IS Attack in Tunisia