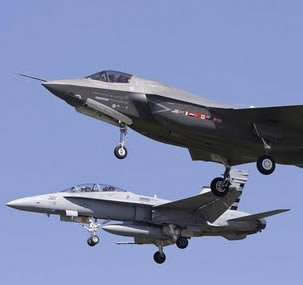 Japan Self Defense Air Force future replacement of F-4J fighters (F-X) is becoming a head-to-head competition between the two American aerospace giants, Boeing and Lockheed martin, offering the F-35 Joint Strike Fighter and an advanced variant F/A-18 Super Hornet. Tokyo is expected to make a decision next month. Besides the two fighters’ operational capabilities Japan is likely to give high marks for involvement of domestic companies. (Nikkei Electronic Edition)

According to Mike Denton, President, Boeing Japan, Boeing has committed to transfer between 70 to 80 percent of the Super Hornet’s production to Japan, including some advanced stealth and agile antennae technologies if its offer is selected. On the other side, Lockheed Martin is also offering Tokyo substantial domestic work share, including license production of the Pratt & Whitney F-135 engine.

Japanese industry has lobbied the government to insist on maximizing localized manufacturing of component, final assembly, maintenance and support. As in past procurement, the selected plane will be built in Japan and procured trough a major local contractor. Previous acquisitions of F-4J, and F-15J were provided by Boeing, while the more recent F-2 is a derivative of the Lockheed Martin F-16 all three were produced in Japan by Mitsubishi Heavy Industries.

Tokyo originally considered buying the F-22 but given the U.S. administration’s restriction limiting the export of this type Tokyo embarked in May 2011 on the less ambitious $4 billion worth F-X program buying 40-60 planes, for which Tokyo was evaluating the export available F-35 Lightning II, a stealthy Super Hornet and the Eurofighter Typhoon. The decision to continue with the program was made despite the huge costs of the March 2011 Tsunami disaster.