January 17, 2012: The Russian Air Force began flight testing of a modernized version of the A-50U airborne warning and control system (AWACS) aircraft. The aircraft was improved with new on-board computers, satellite communications, and an improved radar system installed in its rotodome. In addition to its conventional role detecting and tracking fighter aircraft in subsonic and supersonic flight, the system was enhanced with new algorithms enabling the A-50U to effectively detect and track helicopters, cruise missiles. The A-50 can track up to 10 fighter aircraft for either air-to-air interception or air-to-ground attack missions. The Beriev A-50, based on the Ilyushin Il-76 transport, first flew in 1978. It entered service in 1984, with about 40 produced by 1992. The aircraft was delivered to the Air Force in October.

India to get Russian aircraft carrier by December

January 16, 2012: Russian is planning to begin sea trials with aircraft carrier Admiral Gorshkov in May 2012, anticipating the vessel be ready for delivery by the end of this year. Entering service with the Indian Navy the ship will be renamed INS Vikramaditya. The Gorshkov was refurbished for the Indian Navy since 2004 by the Sevmash shipyard. The original delivery was scheduled for 2008 but the refurbishment was repeatedly delayed due to lack of material and escalating costs. The final price more than doubled from US$947 million to $2.3 billion.

January 10, 2012: Russia has recently delivered a second batch of four Su-30 fighters to Vietnam, in addition to the four planes supplied to Hanoi in June 2011. Vietnam is scheduled to receive the final batch of four planes this year, completing the 12 aircraft originally ordered as part of the one billion US$ arms package. Vietnam is the fourth Asian country operating the Su-30, along with India, Malaysia and Indonesia.

December 31, 2011: During the recent test launch of the RS-18 Stilet (Stiletto) intercontinental ballistic missile (ICBM) Russia has successfully tested a new reentry vehicle planned for the upgrade of its strategic nuclear force. The missile was launched on Tuesday, December 27, 2011 from the Baiknonur cosmodrome in Kazakhstan, and successfully hit its target on the Kamchatka Peninsula in the Pacific region. The new warhead uses a reentry vehicle designed for higher speed, thus overcoming missile defense systems. Operational since 1982, Russia maintains 136 such missiles (designated UR-100N) at four bases – Deraznja, Kozelsk, Pervomajsk and Tatiscevo. The recent upgrade is believed to extend their lifespan until at least 2030. Carrying up to six independent reentry vehicles (MIRV), the two-stage Stilet has an operational range of 10,000 km.

Russia to complete delivery of 21 helicopters to Afghanistan by July

January 10, 2012: Russia is expecting to compete delivering 21 Mi-17V5 helicopters to Afghanistan in the first half of 2012, under a contract worth $367.5 million signed with the U.S. Government awarded in June last year. Nine of the helicopters were delivered within six months, and the remaining are expected to be in Afghanistan soon. The Mi-17 is an export version of the Mi-8 Hip helicopter.

Nuclear Submarine Damaged by Fire while Undergoing Repairs at Murmansk

December 31, 2011: Repairing the Russian Delta class nuclear submarine Yekaterinburg could take at least a year. a The submarine was damaged by a fire on December 29, 2011 while docked near Murmansk. The outer hull of the nuclear sub caught fire during repair work, as fuel and lubricants were set on fire by welding on the submarine’s nose section. Delta-class submarines have an outer skin of anechoic rubber, designed to absorb sound from sonars to make the boat harder to detect, that can burn in a dry environment. The boat has a double hull of thick steel, however, which would protect its interior from external fire. Zvezdochka shipyards officials cited fire safety violations during routine maintenance work as the most likely cause. The sub’s hydro acoustic system was wrecked during the fire and will likely have to be replaced before it is back in service. The overall cost of the repairs could mount to 900 million rubles ($30 million). The submarine is expected to return to operational status by summer 2014.

December 31, 2011: Mexico has ordered three Russian Mi-17V-5 tactical transport helicopters for the Mexican navy. The Mexican Navy plans to use the new helicopters in its war against drug trafficking. The Mi-17V-5 made by Kazan is the export version of the modernized Mi-8MTV-5 military utility transport helicopter. It can carry up to 36 passengers or four tons of cargo and features advanced multifunction cockpit displays and upgraded TV3-117VM engines. The Mi-8/17 is a popular model In Latin America, accounting for about 20% of the military helicopter market in the continent. 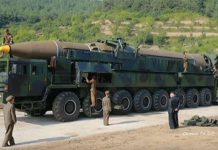